Pirates of the Caribbean has become what I’d like to label a tee-ball franchise. The hits are easy and don’t sail very far even with such below average hand-eye coordination, and yet it’s just as likely to swing for the fences and miss in an embarrassing fashion. That’s cute, at least for a little while, until the restless kids start losing interest, their “hey, batter batter” chatter falling silent and hunched over hands finding a home on the kneecaps. They only have so much patience, and with Dead Men Tell No Tales, I have to say that mine’s run out. The series is losing in a dire 10 run rule fashion. If you don’t know baseball lingo, just think of a war-torn waving white flag signaling an armistice.

A young Henry Turner (later played by Brenton Thwaites) vows to release his father Will (Orlando Bloom) from a wretched life forever aboard “The Flying Dutchman.” Henry’s well-versed in the long-lost legends of the sea, learning that the Trident of Poseidon is capable of breaking any and all spells. He’s an extremely thin character who at least has a semblance of purpose and motivation behind his actions. As fate and ill-fortune would have it, Henry eventually crosses paths with the cursed Captain Armando Salazar (Javier Bardem), searching and seeking for revenge against the notoriously dishonest Jack Sparrow (Johnny Depp). How many times can we endure the same chase when we can already predict the end? This ship is more insultingly watered down than it is ever amusing or exciting. 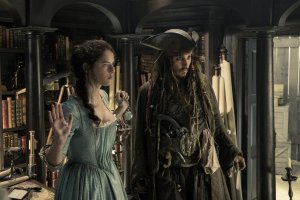 Most of the crew members return, including Captain Barbossa (Geoffrey Rush) and newcomer Carina (Kaya Scodelario), a young academic and a student of science. Dim-witted and cheap jokes are made about her being a horologist (the study of time), insinuating that she must be a whore because such stupid pirates don’t understand the concept of homophones. It makes sense for the time period but doesn’t translate well to modern audiences. Nor does the rest of this unsalvageable and uninvolving period piece epic that’s so lacking of any sort of personality. Dead Men Tell No Tales is adventure strictly for adventure’s sake.

There are a few fun set pieces to be had; one in particular where an entire building is hauled away in attempts to rob a vault provides a little spectacle. But then again, that’s really all these movies are anymore. I’d call the original a triumph, and even the next two installments from Gore Verbinski, while utterly ridiculous, have a little bit of fun with their own increasing idiocy. Yet none of that exists within Dead Men Tell No Tales, a wannabe swashbuckler on steroids that chooses to gargle its stupid rinse and repeat formula to no end. Rarely does a fisherman’s tale feel this preposterous and immensely boring. What a gratuitous attempt to make an entertaining and mindless movie.