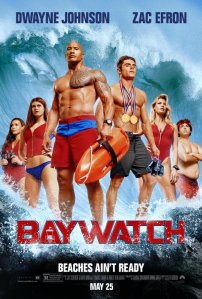 You probably shouldn’t see this movie if you’re easily turned off by a bounty of cleavage or an onslaught of penis jokes; the film’s focus on breasts and the bullish groin references are front and center in this all-out assault on the physical composition of the sexes. That’s pretty much the point of it all, too. Why wouldn’t a comedy about sun-kissed Greek gods exploit their physical attributes? So while it’s wildly inconsistent with its tone as well as basically two different stories stuck together at the hip, Baywatch at least achieves most of its minor ambitions to be crude, be rude, and to make us laugh at its own absurdity.

With more than 500 saves under his belt, Mitch Buchannon (Dwayne Johnson) is a Floridian superhero in red swim trunks. The film begins with him jogging the beach, busting through a game of basketball, noticing a little boy finding a bag of drugs washed ashore. He’s like the high school quarterback, the prom king, and the valedictorian all wrapped up into one well-meaning man. The “Bae of the Bay,” you might say. Mitch takes his job seriously – maybe too much so – and puts a group of hopeful lifeguards through a grueling gauntlet as they try to become part of the team. That disgraced Olympic swimmer Matt Brody (Zac Efron) is given a free pass to hop on board doesn’t sit well with him.

Brody’s character is a bit too puzzling. He deems himself to be “80% trill and 20% dope” doing his best Ryan Lochte impersonation. Yet while he’s no genius, he’s no idiot either, making us wonder who he really is. Played by Efron in a role that’s practically become his second nature – a fragile, hard-drinking, lady loving man boy – there’s good chemistry found between him and Johnson, who continues to go big or go home. Say what you will about his extensive yet lackluster filmography, Johnson is the world’s current superstar actor for a reason; he recklessly pours himself into his characters through an unmatchable work ethic. Round out the cast with Kelly Rohrbach as the new C.J. Parker, the underutilized Stephanie (Ilfenesh Hadera), plus trainees Summer (Alexandra Daddario) and Ronnie (Jon Bass) and Baywatch becomes a likable ensemble piece when it’s willing to stick together.

Where the film undeniably falters is in its tone and its questionable length of 2 hours; what starts as a knowingly self-serious re-imagining of the series told with a sailor’s tongue becomes a sporadic and uninvolving crime investigation into real estate mogul and drug queen Victoria Leeds (Priyanka Chopra). Add in Seth Gordon’s shoddy work directing action sequences and you’d think that Baywatch would be lost to the tide. But this is a big, dumb, hot-tempered good time with a cast that makes you think, “I’ll bet they had fun making this, so why can’t I let loose and have fun too?” Similar to CHIPS from earlier this year, Baywatch acknowledges and pays service to its past while confidently being its own beast. I didn’t hate it like I thought I would, nor did I come anywhere close to loving it. But I’ll be damned if I didn’t laugh a bit. Here is a prototypical Summer movie through and through.

“All things considered, everything could have gone a lot worse.”