“We need your faith.”

To pull apart Ridley Scott’s latest – a frustratingly uneven piece of near science fiction genius – we must first dive into its messy nature whilst understanding the purpose of the title’s definition. There are aliens, to be sure, and there is a covenant tacked on for good measure. But what does the latter actually mean? Here, the covenant is sacred. A friendly spit shake elevated by a blood brother oath between the palms. Are these deals meant to be broken and agreements made with false promises? Such questions seem to be fuel to this series’ fire. This contemplation propels the deceiving nature of Alien: Covenant and its underwritten themes, which are ultimately emphasized by its significant interest in mankind’s contractual agreement to one another leveraged against the unpredictable nature of advanced and committed technology. Mr. Scott has made an entertaining, albeit fairly flawed film; he’s also painted a vital portrait of our times. 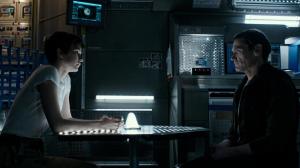 The year is 2104. 15 crew members, 2000 colonists, thousands of embryos are aboard the Covenant spaceship. They have years until they reach their destination planet before being awoken early as unforeseeable conditions damage their craft, requiring more maintenance than the resident android Walter (Michael Fassbender) can remedy alone. This introductory sequence looks beautiful while also being a monumental misstep in character development. The same can be said for most of the movie as well; these are more faces with names than people with identities. Daniels (Katherine Waterston) mourns the loss of her husband (James Franco), burnt to a crisp due to a faulty cryo-sleep chamber. Next in command is Oram (Billy Crudup), a man on a great scientific adventure who still reasons through a faith-first approach. He lacks the crew’s support. As fate would have it, they stumble upon a presumably safely habitable planet while en route to their original destination, and because Alien: Covenant belongs to the horror genre, it means the possibly dangerous unknown must be seen to be believed.

The film’s title sequence includes a brief but otherwise important shot of the Covenant – a mere speck among the countless stars – faintly gliding across the screen. Not only does this subject us to humanity’s irrelevancy in the unquantifiable depth of the universe, it also glimpses into the reckless ambition of these pioneers chartering through space. There’s a reason that their ship is fueled through massive energy gathering sails; these are unknowing predators and pirates. Breaking ground on this surprise new planet seems promising, even too good to be true. Vast green forests, large bodies of water, crops of wheat that have been planted by…someone/something. They find the crash-landed ship from Prometheus, people are infected and die as the aliens spawn, and then they’re “saved” by David (Michael Fassbender, again). Visibly similar to Walter, following David is like hugging a leper. His illness spills outward, and because he was deemed too human for cooperative A.I., Walter is the model answer that’s more inclined to obey than to command. At one point David compares himself to Robinson Crusoe in what is a pitch-perfect modernization of a fatally flawed character. What’s the difference between the two? Crusoe’s intent is like an Iggy Pop 17th century lust for life while David’s deranged modus operandi aims to perfect creation. 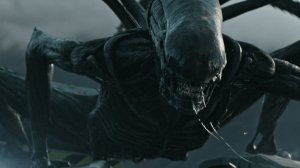 Some will critique the stupidity of these characters which is beside the point for this genre. Horror films and thrillers don’t make us squirm by being idle but rather by inching around every corner, investigating the dark, and by almost 100% relying on cat-like instinct. Going off on your own in a weird world not only makes sense by that logic, but adheres to the themes in place. Alien: Covenant does just that. It’s a movie where character development is ancillary to the encroaching tide of the grim plot. This is a bold move, especially because we rarely ever care about the on-screen deaths. Daniels – like Shaw from the previous prequel installment – is molded from the same short-haired and hard-nosed likeness of Sigourney Weaver’s Ripley without any of her smarts. These are weak leading characters, surrounded by even worse written supporting casts, leading pictures that don’t belong to them. Scott’s prequel series really revolves around the monomaniacal David. Covenant’s first shot fills the screen with one of David’s eyes. It might as well be a Hal 9000 red dot, signaling a creation who comes to loath and pity his creator. What better way is there to humanize technology than to mold it as our own? That’s a scary thought, and when you get to know David, you can almost imagine him suppressing laughter while licking his finger page after page through Darwin’s On the Origin of Species and saying, “How rudimentary. How fragile. How dispensable these people are.” 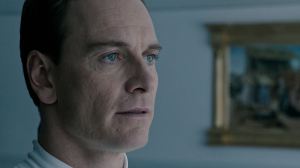 Staring up at Michelangelo’s curated sculpture in his creator’s white-walled archive, the robot declares himself to be David. He thinks himself to be big, and more egregiously, definitively perfect. Scott has often toyed with man’s relationship to technology in the past – Alien, Blade Runner, and The Martian all bear such qualities – but in Alien: Covenant he skewers our reliance on the power grid more than ever by showing a clear favoritism towards David’s Ozymandias doomed odyssey. Ridley’s no Luddite…after all, how could he be? Tech allows him to tell stories, with which here Mr. Scott conveys an extremist cautionary tale of what can go right and can go dreadfully wrong when we put our faith in the faithless. Fassbender is an all-time talent playing an all-time villain in a movie that’s constantly manipulated by him without constantly being about his character. That’s a conundrum and part of the film’s identity crisis; the devil, looking to replace one viral race with a more obedient and destructive one, is more interesting than the angels. Never is that more evident than in the final scene. Dread piles over, Wagner’s “Entry of the Gods into Valhalla” pummels our ears, and it becomes clear that the model of perfection is really that of Narcissus staring into his own reflection, admiring a beauty all his own. Alien: Covenant may not be a great film in some crucial aspects, yet what it does manage to get right edges along the outskirts of the profound. How many other filmmakers could combine Greek mythology and hard Science Fiction to offer a worthwhile commentary as broad as the state of existentialism and as narrow as the chaotic state of the union? Perhaps there’s only one.

“If you created me, who created you?”