With the release of Phone Booth back in 2002, Grand Piano in 2013, and now The Wall, we have an exceptional trifecta of films which equate to adult nightmares. These are pictures about being confined, tortured with hard choices, experiencing unknown levels of pressure in desperate situations. And in every case, the leads are menaced by the voice of an unknown boogie man, a devil on the shoulder whispering into their ears. That’s terrifying if you really think about it. By justifying its characters’ motivations – treading an extremely fine line between good versus the bad – and by humanizing the off-screen enemy, The Wall aims for and hits its mark because it actually sparks a dialogue between its foes. 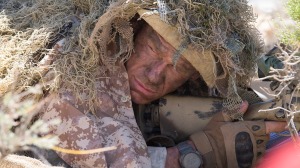 It’s 2007 and the Iraq War has been declared over by the Americans. Which begs the question; why are soldiers Isaac (Aaron Taylor-Johnson) and Staff Sergeant Matthews (John Cena) still there? For these two men, war is not only just a tragic way of life, but it is life itself. They respond to a distress call near a pipeline construction site. 22 hours baking under the sun and Matthews calls it quits. No sniper could sit and hold out longer than he. Things are amiss as he approaches the scene though, all the targets taken out by head shots, calling the situation fishy right before he’s struck in the abdomen. Isaac runs down, is shot in the knee with other bullets nesting in his radio and water bottle, and takes cover behind a man-made wall. There he’s his own medic while Matthews lays in the desert trenches. The vultures swirl above while their meals cook below.

The setup behind The Wall is literally as workmanlike as its title’s rickety partition; these men with their dirtied and baked faces are expanded upon only when necessary. That’s a fitting trait for a lean and mean film about the psychological cost of warfare, especially from a prideful and trespassing American mindset. Aaron Taylor-Johnson (again entrenching a place among his generation’s elite talent) plays Isaac with both the calloused empathy of a soldier who’s witnessed hell and the susceptibility of a man trying to understand an alien sharpshooter (voiced by Laith Nakli). This is literally “eye for an eye” cinema as two men try to clearly see one another from a distance, both keen to kill, while also serving as a deeply metaphorical take on the gap between cultural perceptions and inherently wrong misconceptions. The Wall boasts telling visuals which are accentuated by even smarter discourse.

Doug Liman’s film jolts you into squirms of pain, smart thrills, and engages us in a bloodied therapy session between friend and foe. Could it have gone deeper? Yes, had it been longer. Would it have been more profound with a suitable open? That’s up in the air. However, by opening the film with the English title and the Arabic title just below it, The Wall encapsulates an unfounded American ideology of pride before deconstructing patriotism and patiently hunting it down from an omniscient position of power. So many of us assume and actually think that we’re smarter, better, more capably creative in the face of adversity than our cross-continental brethren. It’s simply not true. And so the film relents to the tailspinning fatalism of a war that knows no end. The Wall’s finale might infuriate you and might make you wish that there was more closure. If that’s the case, maybe you should consider that’s how some people feel about our continued occupation in the Middle East.

“There is no endgame.”