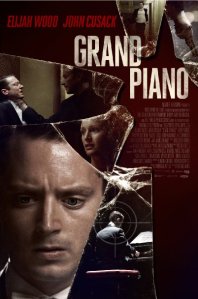 “I play piano. This is just another gig. Nothing else.”

Grand Piano is perhaps one of the most captivating, strangest, and intense movies in recent memory. It’s a combination of Phone Booth and Shine on steroids. Throw in some dizzying visuals and adrenaline pumping classical music to amplify the effect even more. Contemporary thrillers, for the most part, aren’t all that thrilling. Even if we don’t know what is going to happen, the reveal is so upfront or so restrained that it doesn’t pack a punch. This movie circumvents both of those mistakes with its unique premise and impressive imagery. It almost plays out pitch perfect.

Tom Selznick (Elijah Wood) is a piano prodigy. He also happens to be a nervous wreck and afraid of flubbing notes, as he often does, while on his pursuit to live up to his deceased mentor’s prestigious reputation. A performance gone awry in an attempt to play a seemingly unplayable piece sends him to the sidelines for five years. That is until his wife Emma (Kerry Bishe), a movie star actress, forces him back into the limelight. Tom is reluctant, and even goes so far as to hope that his flight to Chicago for the big performance doesn’t land. The crucial night comes, and Tom looks like an inept fibber taking a lie detector test. He fidgets and sweats uncontrollably as the elegant Emma reassures him of his otherworldly ability. He begins in front of a sold out crowd, playing safe pieces he’s sure he has mastered. Everything is alright, at least until he turns the page in his notes and finds a sniper’s red dot near his hand.

Elijah Wood carries this movie. He’s never been a renowned actor or a headliner, but his talent has always been undeniable. Wood drifts along with this character, shifting from timid to morbidly afraid without a hitch. His out of sight foe, Clem, voiced by the surprisingly menacing John Cusack, is a stickler for perfection. Tom plays his mentor’s old piano, and little does he know that playing La Cinquette (the unplayable piece) physically unlocks the instrument, holding a key to riches for his shadowy captor. It’s all very procedural. The rules are laid out for Tom. Stop playing, miss a note, try to call the police. Any action unaccounted for will result in his death as well as of his loved ones.

Confined movies normally don’t work. Unless the project is helmed by a talented filmmaker, the movie often feels stale and reaches an impasse. Director Eugenio Mira excels at taking this story far beyond its own reach. The premise is radical, but could have easily been turned to rubbish in the hands of a novice artist. Mira builds the tension matching the pace of a classical piano piece. It crescendos and peaks at all of the right moments, and at others becomes visually distorted to the point that it’s disorienting. Shots are specifically chosen to enlighten the audience, such as Tom alone onstage against a blood-red backdrop. We get a sneaking suspicion of what’s to come. The visual and auditory senses harmonize into one claustrophobic roller coaster ride of a movie. Despite its lack of an antagonist with a meaningful motivation, which makes the end a little disappointing, it keeps us intoxicated. A little tweaking to the story and it could have been a symphony.

It’s always nice to see a movie that neither overstays its welcome or waits for the door to be shut behind them on the way out. Grand Piano is a gripping film, and somewhat works as a meditation on the separation between artists and the audience. We don’t know what is going on with the stars we adore up on stage, just as much as the blinding spotlight, literally and figuratively, keeps them from truly seeing their audience. At one time or another we’ve all been the nervous person in front of a crowd. Sometimes we succeed and sometimes we bomb. This sui generis movie pays off, even if all of the right notes aren’t struck. Its soaring artistry and ambition remain intact, and maybe, just like Tom’s blunders, the audience won’t notice the minor mistakes during the whirlwind of action.

“They won’t know…they never do.”