“Yeah, we’ll use a coupon and get him a cheap hooker.”

The Bromance has been such a common trope this past decade. Supposedly it portrays the way men are hardwired, and how they are supposed to interact with each other. As evidenced by the above quote, that’s what That Awkward Moment strives to achieve. Simply said…it doesn’t. Here is the most casually misogynistic movie I have ever seen. And it’s a shame. The cast is loaded with budding talent, and a few parts shamefully made me laugh out loud. Then the charm is thrown aside when the guys make jokes about accidentally masturbating with tanning lotion. Maybe that fits the “awkward” billing, but seriously, who does that?

Jason (Zac Efron) sets up this brainless tale of virile masquerades. His pal Daniel (Miles Teller) ventures over to his apartment, normally just to take a crap. Mikey (Michael B. Jordan) comes over a little bit later, revealing that he’s getting divorced. Their testosterone-filled response is to hit their favorite bar and help Mikey build up his roster (a list of girls they call at a moment’s notice to hook up). We get no sense of their friendship at all. Instead we’re thrust into the middle of a poorly written story that feels like a rated R Lifetime movie. Jason and Daniel decide to be single so long as Mikey is. They’ll live the ultimate bachelor lifestyle. But that proves harder than they originally thought.

Another evening out partying introduces the captivating Ellie (Imogen Poots) into Jason’s life. For Daniel, the carnal temptation comes from Chelsea (Mackenzie Davis), their beautiful friend that tags along and somehow nobody ever notices her looks. Mikey’s answer is sex with his soon to be ex-wife, as often as possible, even if she has been sleeping with her divorce lawyer. There’s chemistry between the five main characters in this part of the film, and they elevate it from being entirely horrendous. Since everything is so evenly spread out between them we don’t get a clear main star. It’s obviously meant to be Jason, but so much time is dedicated to the other subplots that he doesn’t have enough weight to be the true leading man. The two women give the movie’s only intelligence and probably could have made it bearable had they been involved more. 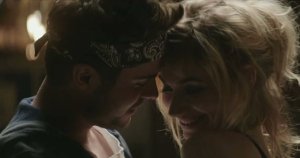 I’d be interested to know what director and writer Tom Gormican was thinking when he sat down to write this story. And especially how he thought it had any promise while in production. He chooses to open with a set-up before the title card that does absolutely nothing for the story, and despite the onscreen rapport, these guys are blank slates. It’s as if he told the actors, “Here, just do what you want.” Scenes drag on with failed attempts at improvisation and slapstick humor. Somehow with this title there really aren’t that many embarrassingly awkward moments. Those are the best parts, and had he just remembered what he called his own movie, maybe it would have turned out for the better.

Depth in movies is more important than detail. Audiences are smart enough to fill in the blanks if they can guess what might happen next. But at the same time, they probably don’t want to pay the price of admission just to see three assholes proudly parade around and alternate between being gentlemen and pricks. The quote below is enough confirmation that not only are these some of the most shallow men depicted in film of late, they’re also the most careless, for themselves and for others. That Awkward Moment hits an iceberg of sexism head on, and only thanks to the cast does it not completely sink.

“I was going to make you wait too, and then I realized I’m a dude.”