“You don’t have any direction in life.”

It is not lost on me that there have been quite a few comedies I’ve loathed that some readers still managed to enjoy, or that I’ve liked a couple that went without appreciation from the masses. Only the genre’s best of the best work for every assembly or crowd. Snatched exists in between those two fine lines though, camping out in a no man’s land of cursory and illogical plotting. Even worse, the picture is frustratingly and infrequently funny, making this one far more miss than hit. Watching these two talents break bad should at least be a little bit exciting. Instead it’s mostly miserable, lethargic, and futile to even try to commiserate with.

Emily Middleton (Amy Schumer) is pathetic. A non-refundable trip to Ecuador booked with her boyfriend Michael (Randall Park) looms. He’s in a booming band and decides to dump Emily so he can sleep around. She also loses her job in retail because she never asked to take days off. No “friends” want to take the extra ticket and we don’t blame them. I have a hard time imagining anyone wanting to spend time with her. So instead Emily coerces her mother Linda (Goldie Hawn) – an adventurous spirit in her youth who’s now a shut-in cat lady – to tag along. Snatched borrows elements from Romancing the Stone and the classical expedition of The African Queen, undone by what’s rapidly become Amy Schumer’s routine of slut shaming. It’s a worthy cause, yet as a feminist myself I wonder if Schumer’s schlock does more damage than good here. Trainwreck succeeded because it was so grounded and relatable. At a certain point though, this just gets old. Will Ferrell is a comedic genius, and even then I find myself muting the television when he resorts to kicking and screaming and being an adult baby. Snatched bears a semblance with this imbecilic and easy comedy. Not only is it a missed opportunity; it’s a step in the wrong direction for both of its stars.

Once in South America, Katie Dippold’s script and her idea of conceiving laughter from uninspired conflict becomes its own bad joke. Case in point: the selfie obsessed Emily allows herself to be wooed by a handsome man who lectures her on living in the moment, which might sound good and all, until we learn she’s being given a life lesson by a criminal. We’ve seen all of this before. We know that Emily’s insanely low self-esteem is her fatal flaw, as well as the eventual reason for their kidnapping. These antics are where the picture enters the tumble cycle, still so soaking wet that it can’t be rung or hung to dry. Not only are our heroines lost in the Amazon trying to escape their captors, but we too are left to wander around a ho-hum plot whilst trying to steer clear of the movie’s worst elements. Suffice to say that I found Snatched to be more like a slow descent into quicksand than the well-rounded and insightful mother/daughter comedy crusade it clearly aims for. 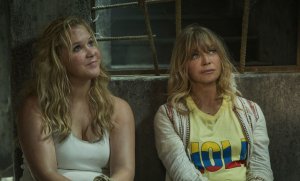 What are meant to be B-story plotlines which elevate our central duo only end up becoming mere tangents. The lesbian couple of Ruth (Wanda Sykes) and former special ops agent Barb (Joan Cusack) land D.O.A. They’re purely included to escalate matters. And then there’s Jeffrey (Ike Barinholtz), a grown man still living with Linda because he suffers from agoraphobia. Barinholtz is always good for a laugh, despite the fact that many of the jokes come at the cost of his chronic anxiety. Snatched really only gained my interest when director Jonathan Levine went for a retro aesthetic by introducing Emily and Linda to wannabe swashbuckler Roger Simmons (Christopher Meloni). This very brief chapter has what the rest of the film lacks: charm, disposable stakes, and an above average punchline. As for the rest of Snatched, it’s as smart and as humorous as its double entendre of a title, and is a heavy pour best suited for the most devoted boxed wine enthusiasts.