You see the poster and you watch the trailer for Knock Knock and expect a low-budget, campy horror comedy. And to start that is what we get. But then you remember you’re watching an Eli Roth movie, meaning that it will be atrocious. Roth has a fascination with a genre which he shouldn’t be pursuing. He can do comedy, he can do action, but his muddled mix of the two with a spike of phony scares doesn’t work. Roth may be a fine director, and I truly believe he is. He’s also an indulgent and inept storyteller. One of the only positives I can say is that this isn’t the worst movie of the year (although it’s close). Knock Knock is an absolute joke. 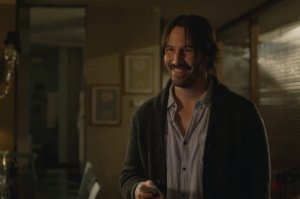 Evan Webber (Keanu Reeves) is a sickeningly happy family man living in Hollywood. With a gorgeous wife and two little ones, Evan lives in the kind of home you’d expect from his architect profession. Clean lines, modern, open spaces. Knock Knock starts by tossing reality out the window and settling in for a lack of sincerity. Families like this one exist only in the movies, so we know we shouldn’t take them or the story itself too seriously. The little weight works for a few scenes before Evan is left alone to work over Father’s Day weekend, a dumb plot device that is only believable because these people are so implausible. A heavy downpour brings two innocent girls to his door. Of course he lets them inside to dry off, use his iPad, roam his halls; Evan is a nice guy. Maybe that’s why he finishes last. 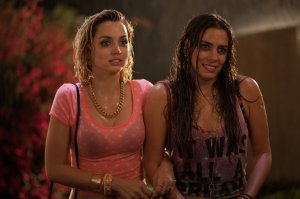 It’s not all that hard for Genesis (Lorenza Izzo) and Bel (Ana de Armas) to seduce Evan. He used to be a hard partying DJ in his youth, and being smothered by these two lolitas takes him back to his glory days. The three end up sharing a night straight out of one of those late night softcore adult films. Endless sex in every position possible. These girls won’t quietly sneak out in the morning though. Knock Knock fails so miserably because it refuses to be about anything. Social critiques require insinuations. Here it floats around from issues of fidelity, possession, restraint, all before it turns into a bizarre exploitation feature of To Catch a Predator. You sense that pedophilia only wrestles its way into the film because Roth is head over heels in love with his deep attachment to depravity. And that’s fine. It’s his movie. I just wish he’d realize that what he wants and what he does is never objectively good.

In fact, Ana de Armas is the only part of this wretched movie with any appeal. She’s gorgeous and torturous, and while these girls are criminally underwritten with no motive in sight, de Armas still brings layers to her enchantress. Izzo is married to Roth and her performance indicates that is the only reason she was cast. Reeves is a bit of a mystery here. He can be awful and outstanding all in the same scene. When that happens, the fault lies with the director. In this disgustingly dumb game of cat and mouse, Roth has made a picture that shows his technical skill while also highlighting how terrible he is at writing. There are no beats, no signs of carefully thought out character development or purpose of plot. Knock Knock is a whole lot like the annoying neighborhood kid who always asked if you could come out and play. Sometimes it’s just better to lie and say you’re busy.

“What’s the point of this?”