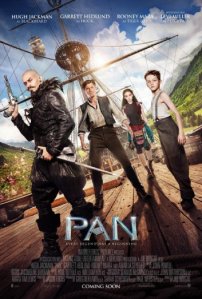 “You are not special, Peter.”

I’m starting to think, and maybe even contend, that the tale of Peter Pan is one not meant for the screen. J.M. Barrie’s stage play and eventual book brought to us a character full of fleeting adolescent wish-fulfillment. A boy who can fly, who can duel with swashbuckling pirates and live in a place ungoverned by adults. Peter Pan is a fictionalization of any child who has ever wanted to run away. But there is a sadness to this story of the boy who never grows up; an emotional and physical neutrality. In Pan, an aloof film with grand scale and scant intimacy, the results are puzzling. Even more, I believe them to be troubling. How can kids and adults alike surrender to magic when we know it’s not real in the first place? At least there’s a sing-a-long to the tune of Nirvana’s grunge anthem “Smells Like Teen Spirit.” No, I did not make that up. Yes, that’s in the movie. Of course, you should laugh reading that.

Pan never shies away from embracing its origin story angle. Over narration to start we’re told, “Sometimes to truly understand how things ends, we must first know how they begin.” The problem is that this story, boy, world…none of them need it. Peter (Levi Miller) is a 12 year-old boy living in a London orphanage. He was left on the stoop as a baby by Mary (Amanda Seyfried), his mother here and his love in other iterations. Having seen every screen adaptation, there really is no logic to that choice other than trying to differentiate itself. Anyway, after finding the nuns to be hoarding rations and loot, Peter and his soon to be Lost Boys are sent off by Mother Barnabus. Snitched up by the Pirate Blackbeard (Hugh Jackman) in the sleeping hour. Suddenly they’re aboard the Jolly Roger and sailing the foggy skies on London. Pan doesn’t separate real world repercussions from magical possibilities, and so the blurred line between our world and the next loses its distinction of a far-away fantasy. It feels like Neverland by way of Alice, minus the shock and awe.

Kids might enjoy this movie with its popping visuals and forced humor. However, I imagine few of them, if any, will pine afterwards to revisit. To yank at their parents legs and cause a fit until they get their way. On the contrary, for some adults it’ll feel more like a bad 50’s exploration feature than an entertaining night out. As is the case with almost every bad movie to have ever been, Pan and its director Joe Wright are failed by the script. There’s James Hook (Garrett Hedlund, overacting like always), in a role that is predicated on the film Hook yet brash enough to ignore it. The princess of Neverland’s indigenous tribe is played by Rooney Mara, an actress as fluorescent as the screen I’m typing on. Whitewashing this role with a star name is inexcusable and manages to match Aloha’s insensitivity in casting Emma Stone as a Hawaiian. Mostly though, Pan is a story about a boy who doesn’t want to grow up. That’s his most defining character trait. And yet it’s nowhere to be found. 2003’s Peter Pan is the lone film in the catalog of adaptations to deal with the gravity of Peter’s decision to forever remain a child. That movie plays more like an over-produced play, but at least it has shadows of complex emotions for Peter to try to snatch up.

Perhaps I’m biased in my opinion that Hook is still the best rendering of Peter Pan. Yeah, I know, I definitely am. I recently rewatched the movie I treasure so deeply from my childhood, and was surprised by the plot holes and pretty glaring flaws throughout. That’s not something you expect from a Spielberg film. What you do expect, though, is an irresistible and contagious sense of wonder. Hook is a grounded take on a gliding story with lavishly detailed sets. And those sets, or the lack thereof with Pan, is what I said worries me about this movie, or just the state of the genre in the first place. Children are not dumb. They’re not yet jaded or pessimistic. But they are observant, and what they digest with this film, as well as most aimed at them, is completely fake. Only the people in these movies are tangible. None of the surroundings make their hamster wheels whirring at 100 mph stop and think, “Hey, wait a second. That is real. They’re actually there. Maybe it’s really really real.” Pan sets sail against a tidal wave of a bad script, capsizing before the going gets tough, and before anything actually gets going. Bangarang, Peter. You’re just another one of the Lost Boys now.

“I don’t believe in bedtime stories.”