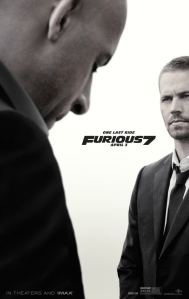 “You can’t outrun the past.”

To this day, I remember the pure pedal to the floor magic of The Fast and the Furious, the first in this drawn out franchise. It was impossible to watch its practical stunts set in an underground world and not want to jump behind the wheel. To install nitrous into your car and whiz down the road, blurring everything outside your windows for a second. This time I left the theater grappling with the realization that Furious 7, a cautionary tale for filmmakers in over the top foolishness, doesn’t let its massive following in on the chase. It’s thrilling, but never inviting, and that’s because when you go as big as you can there is an inevitable loss of humanity. I know people will blindly go into it with war cries of perfection put on-screen, mostly to revere the inescapable talent of the late Paul Walker. Still, imagine that he was living, that the franchise continued on with him. It’s a letdown for the lack of a better word. Furious 7, the worst in the series, aptly drops the fast and retains the furious in this plodding, bellicose playground of explosions and one-liners.

For how much happens in the movie, it’s actually rather thin on plot. The crew has to deal with Deckard Shaw (Jason Statham), the ex-assassin whose little brother was killed in the previous installment. Shaw hunts them down, trying to off them one by one, comically always showing up at the exact right time. Shaw is as one-dimensional as villains come. He’s a phantom out for blood and never stops, like a humanoid T-1000 from Terminator 2: Judgement Day, always chasing and unable to be killed. I’ve said it before and I’ve said it again; villains must share traits with the protagonists to give depth. Shaw and the crew both deeply revere family. That’s the single chain link in the fence. Furious 7, as fun as it can sporadically be, is shamefully written. I understand absurdity, a trait best saved for comedies, but this is just too much to handle. 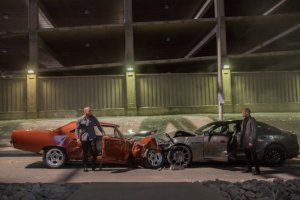 This is a global franchise and none of the previous films have matched the widespread appeal that this presents on face value. There’s a diverse cast matched with a variety of locations spanning four continents to bring as many viewers as possible. What could go wrong? Plenty does, and until the ridiculous destruction of the Los Angeles metropolis, it’s all a sheeny and gilded show. Furious 7 is the omen child of Michael Bay’s gaudy, bombastic shooting style and Roland Emmerich’s fascination with global CGI destruction. Yeah, it may look good to the naked eye, but you’d never bring this movie home to your parents. This is a fling, a one night stand of loathsome action built upon the rafters of wavering dramatics. The best in this series succeeded because of their heart. Furious 7, up until the last 5 minutes, is a violent zombie without a pulse. 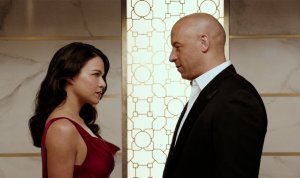 I can’t say much about the cast that hasn’t already been said up to this point. We recognize them, know them, care for them. We don’t need their backstories prior to a reassembly. Cut it out and you save 15 pointless minutes in an already lead-footed story unwilling to shift out of first gear unless it comes to pyrotechnics, grenades, or machine guns. Director James Wan handles the fight scenes with the flair we’ve come to see from his domination in the horror genre, but everything else is disorienting. Casual conversations are battles of circle versus counter-circle, pan versus pan. It’s dizzying. Wan has said in interviews that he is open to, and wouldn’t mind, directing a big budget superhero movie. Knowing that changes my whole perception of the film. There is no heart to Furious 7 outside of the casts’ clear personal connection both on-screen and off. Rather, this feels like Wan’s audition tape he’ll be sending to Marvel and Warner Brothers. He has tried to make an Avengers style team out of once street-racing, small-time crooks and failed miserably.

My biggest fear with Furious 7 is that it will be endorsed by the masses as a tribute to Paul Walker. I for one can’t see the series continuing without him. Even though this movie failed to utilize his natural laid back likability, when you think The Fast and the Furious, you think of Walker. His leading man looks covered a humble, genuinely kind, honest actor. Walker didn’t have to try to act because he played roles best suited for him, and that’s a wise route for a man who dodged the limelight. As I witnessed last year with the horrendous American Sniper, (don’t argue with me…you’re wrong) when death is involved, whether it be the character being played by an actor or an actor playing a character, people tend give a free pass to the things which make them feel good. It felt good to mourn Chris Kyle. It feels good to mourn the untimely death of Paul Walker. Both rightfully so. But that doesn’t mean either picture is good. It’s sentiment, and when it comes to the trade of critique where emotional subjectivity is either applauded or reprehended, I must stubbornly declare that Furious 7 is relentlessly risible.

In the last 5 minutes of Furious 7, Wan and his hopefully unemployed writers take a back seat to the passion and familial connect of the franchise’s fraternity. The end is a moving and fitting tribute to Walker, a once in a generation talent who was taken too soon, who never had controversy, who never let stardom or fame overtake his life. Sometimes you can observe a person from a distance, and in this case on-screen, and instantly discern a gentle soul and spirit. That was Walker to a tee. Furious 7, until the close, forgets the ties that bind and instead shows us a world where Vin Diesel can lift a car and stomp through a foot of concrete. Where Dwayne Johnson can break his own cast by flexing. These aren’t superheroes. They’re men, women, people. They have personalities, tormented souls, conflicted ideologies of right and wrong. Furious 7, with all of its squeaks and brakes and whistling of bullets can never be taken seriously. I left the theater despondent. Upset because Walker was gone, but more frustrated that the uniquely good-natured, compassionate force he once brought was traded in for the firecrackers and sparklers on sale during Fourth of July.

“Things are gonna be different now.”