Judging from the poster for Ask Me Anything, you’d expect some light fare in the realm of an old Audrey Hepburn classic. So I have to ask myself why the movie has lingered with me. Why did I spend all day retracing the steps, looking for clues where they might be and might not? Because after it’s finished blowing its sweet bubblegum as big as it can, it sharply pops, using the last five minutes to throw us a complete curveball, a new stick to chew on. A lot of this movie is plain bad, yet the ending changes everything and requires some thought in solitude. Ask Me Anything is poorly executed, and largely worse than the rating I’m giving, but has enough early charm and just the right amount of late revelation to make it worthwhile.

Deciding to take a year off between high school and college, Katie Kampenfelt (Britt Robertson) is at a crossroads. She bounces back and forth between her boyfriend Rory (Max Carver) and Dan Gallo (Justin Long), a film teacher at a “respected” community college. Katie fills her days blogging her every move to a growing number of online followers. It’s a release valve for her, a way to spend her time rather than deciding what she wants to do with her life. She smokes, has a budding drinking problem, and puts out for just about any guy, especially the older ones, who shows her any sort of attention. Robertson plays the character like your average bubbly 18-year-old, but it’s clear Katie has issues and treats them in a very detrimental and self-destructive way.

Along her journey of discovery are different jobs meant to show her parents that she is responsible, that she can make the transition from teen to adult. There’s her short gig at the bookstore run by Glenn (Martin Sheen) followed by a nanny job for father and husband Paul (Christian Slater), with whom she strikes up a romantic affair. Katie deals with three different relationships, the pressure from her oblivious mother, and the absent-mindedness of her alcoholic father (Robert Patrick). Ask Me Anything, while mostly sprite, paints a grim portrait of the male gender. Save for her mother’s fiance, who is just there, no man really has a redeeming quality. Their male gazes are driven by sex and lust or out of awkwardly creepy attempts at friendship. That may be true in some instances, but here it is way too broad.

The problem with the story is that Katie likes the gaze. She enjoys the attention from men as much as she does the internet fame brought on by her blog. The director / writer Allison Burnett doesn’t handle the material as well on-screen as his highly praised novel Undiscovered Gyrl, which this is based on, succeeded on the page. You can tell he knows his own story and how to tell it, but there is something obviously lost in translation. He shoots Robertson in her bra and panties as often as possible and it never adds to her character or the story. Instead it feels like his own objectifying male gaze. And while every main character is white, the rest of the small roles are filled by minorities. I wish Burnett hadn’t adapted the book and hadn’t directed this. It certainly sounds like an intriguing premise that could have been a much better overall film. Watch this and tell me it couldn’t have been Gone Girl for a younger audience. Had he made it darker, Burnett would’ve had a solid and rewarding movie on his hands. 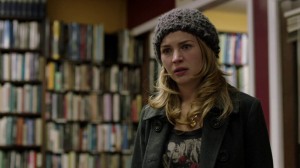 Ask Me Anything goes for the wrong tone. The trailer sells this as a dramedy…this isn’t funny, and at times, especially the end, it can be rather disturbing. I’m a huge fan of Robertson and her quirky cutesy charm, but she feels miscast here. Not that she isn’t impressive in this challenging role. Everything about her is too wholesome, and seeing her pour her all into playing problem child doesn’t feel real. For what it’s worth she refused to do press for the movie (maybe because of personal insecurity for the nudity and sex scenes, maybe prompted by Disney to keep the girl next door aura she has to her for her upcoming summer blockbuster Tomorrowland). Ask Me Anything is abrupt and unfinished, but the surprising finale really changes your perception on the rest of the story. For a movie revolved around sexuality, promiscuity, and debasement, the all important climatic acme doesn’t fail to hit the right spot, even if it does take until the end to straighten its aim. Lastly, if you came to this post in hopes of spoilers or an explanation of the twist ending, search through here and you’ll find all the speculation and theory your heart could desire.

“Your generation is addicted to attention.”