We’ve all seen high school slashers and we’ve all seen body swap comedies, but never before have I personally seen the two fused together at the hip the way that Freaky has fashioned itself. And I can’t believe it kind, sorta, mostly works the entire way through. It’s goody, incredibly gory, at times even dramatic and somehow heartfelt. There are so many ways this film could have gone wrong and, more often than not, it shows the wits to properly navigate this tightrope act of a plot. I’m not surprised it occasionally loses its footing, but I can’t believe it didn’t swiftly fall on its face. Freaky is flat out familiar fun.

Starting out with all of the expected genre clichés hilariously put on display in that old Geico commercial (i.e. “Are you crazy? Let’s hide behind the chainsaws”), Freaky begins like your typical slasher. Horny teens surround a fire in the backyard of a suburban mansion, discussing urban legends, only to get slowly picked off by a masked man one  by one in brutal fashion. If you think that’s a spoiler you might need to watch more movies, just saying. Anyways, Freaky abruptly pivots to the world of Millie (Kathryn Newton), dealing with the anniversary of her dad’s death, the detachment from her mother, and the social turmoil of homecoming week. It doesn’t help things that there are dead students and a deranged killer on the loose. 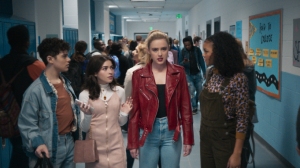 Freaky begins to test its boundaries and walk out into its murky swamp once the body swap finally occurs, forcing Newton with the tough task of embodying a psychopath and Vince Vaughn with the even more difficult challenge of pretending to be a petite teen in a 6’5″ man’s bulky frame. They’re both game, and even though Vaughn ends up getting the juicier part, Newton is as convincing as possible. Unsurprisingly though, the side characters are given little to no depth, which is detrimental because they’re so pivotal to the second half of the film. Performed handshakes and exposed secrets show us that Nyla (Celeste O’Connor) and Josh (Misha Osherovich) recognize their bestie in another body, but it doesn’t tell us who they are either. Freaky wastes some of its time and should have prioritized developing friendship over executing formula. 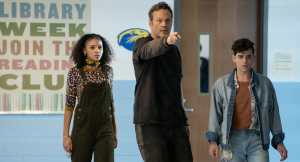 There’s a predictability on display that writer/director Christopher Landon seems to have studied (executed to great effect in Happy Death Day and exploited without purpose or virtue in Happy Death Day 2U), and the script itself hits beats exactly when and where we expect them to land with a trill. The mechanics of the movie work well enough for beginners, probably because we know tides will change 30 minutes in, that a revelation will come at the hour mark, and that this ambitious story meet its maker sooner than later. That all makes Freaky good yet defiantly mediocre, and it’s been executed better on the page than it has on the screen. It is what it is.

“You are a lot stronger than you think.”