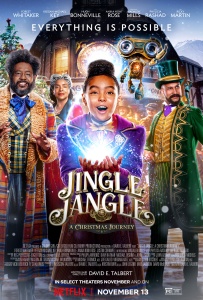 There’s so much magic and humanity on display in Jingle Jangle: A Christmas Journey that it’s almost hard to formally criticize, let alone fully process. This is a tried and true family film, full of adventure and drama with a few decent laughs, and one that’s been carefully told by the fire with a warm yuletide attitude. And that means it should be no surprise this picture is an absolute delight from start to finish. We’ve all seen versions of this film before, yet never have we seen those box store, decorative holiday books and ornate snow globes come to life with this much visceral vibrancy. Jingle Jangle is made up of tinsel and garland and glitter. No wonder it shines and sticks like glue. After a rather stilted opening, we finally get to meet the main cast of characters. The aged and grumpy grandfather Jeronicus Jangle (a ferociously game and sincere Forest Whitaker…he plays a grandfather after all), whose once legendary toy emporium has devolved from a thriving steampunk inspired spot to a dim place where goods are pawned, refuses correspondence with his lone daughter Jessica (Anika Nosi Rose). He’s a defeated widower who’s trying to make ends meet, saddened by the loss of his one true love and his traitorous protegee Gustafson (Keegan-Michael Key), an imposter inventor who stole designs and ideas because he had none of his own. It’s all very common and familiar, at least until Jeronicus’ inquisitive granddaughter Journey (Madalen Mills) forces a a visit. Only then does the story’s spring finally come to life through her brain, grace, and sense of belief. Netflix’s latest holiday endeavor, which could’ve been a major motion picture rolled into theaters during simpler times – and refuses to be another one of their Hallmark knockoffs – admittedly starts awkwardly. For how majestic and regal Jingle Jangle is at so many moments, it’s still a stuffy and overlong film, and a tighter script might have scrapped the lengthy first act altogether, instead opting to utilize calculated flashbacks in a more focused first act. Having said that, the set designs pop, the costumes convey character, and there’s a vibrancy you simply cannot fake. It makes sense that a film this goodhearted ended up being this good. Too much of the movie is perfunctory, but when Jingle Jangle briefly decides to go all out it becomes a grand holiday spectacle full of wonder and limitless inclusion. This is a movie for all people. I wish we had more of them. 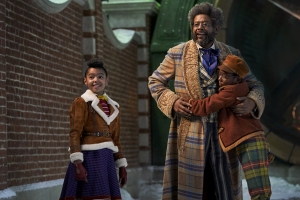 Writer and director David E. Talbert has already proved with his overlooked – and, if I’m being honest, the better film of the two – Almost Christmas that he can handle a family driven holiday endeavor. Here he takes the same formula and sprinkles it with sugar and spice and everything nice from the pantry. Jingle Jangle: A Christmas Journey is a soulful and sweet picture, albeit too predictable and too uneven and too heavily foreshadowed; it’s too easy to tell what it’s doing and what it eventually will do every step of the way. Those hindrances don’t keep it from being inspiring though, and with the determined and gritty original song “Make It Work Again” delivering on its soulful banger promise, Jingle Jangle speaks on behalf of – and ultimately for – the marginalized. This film is quite literally Black Girl Magic personified, discovered and shown through smarts, curiosity, and a formidable sense of self, and it’s as colorful as it is cool. A little editing might have made it a touchstone. As is though, Jingle Jangle is an inevitable modern must watch. It’s a better and wittier musical movie than I ever could have imagined.