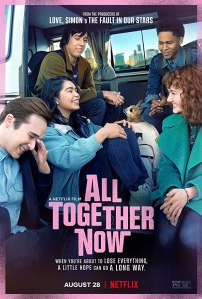 Yes, it’s too quirky. And again, yes, it’s nothing new. But there’s a goodness and a rich soulfulness to All Together Now that makes it more than the sum of its very basic parts. High school drama fused with familial issues don’t exactly make for the kind of secret potion from which you expect alchemy. Yet the film grounds the many clichés in honest chemistry, making for a feel good story that’s predictable but surprisingly joyful, at times even rousing and positively gut-wrenching. Worse films would be labeled as exploitative or manipulative. All Together Now stands just above them. This is a homey film that’s been scattered, smothered and covered in hope. I must admit that I ate it up.

It’s easy to think, apropos the title, that Amber Appleton (Auli’i Cravalho, stunning in her live action debut) is living her best life. She teaches English through song, works part-time at a Donut shop, volunteers with the elderly on the weekend, and is a talented performer in her own right. She definitely and defiantly earns her audition to Carnegie Melon for next Fall. We’re left wondering what this girl can’t do. Her heart is as infectious as her relentlessly positive attitude, even when Joan (an unsurprisingly caustic Carol Burnett), her assisted living confidant, sarcastically tries to brandish her optimistic outlook on things. But there’s a sadness behind her eyes, and an inevitable feeling that she’s extending herself beyond her means. She’s strong enough to run on empty, with fumes which last longer than most. 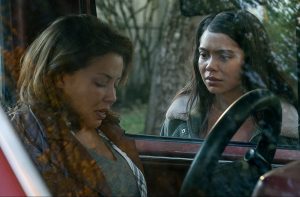 Then night comes and Amber retreats to the parked school bus her mom Becky (Justina Machado) drives each morning. Or at least when she shows up. They are, alongside Amber’s beloved aged pup Bobby Big Boy, homeless and in dire straights. Food is scarce and the struggle is real, especially for Becky, a newly recovering addict drawn back to a toxic relationship with the false promise of a better tomorrow feat. In All Together Now, the traditional parent and child dynamic is completely reversed, making for some truly compelling moments when they’re given time to breathe. They are few and far between, but the honesty is there, and the words are felt. The same can’t be said the lighter portion of the film, especially concerning Amber’s group of friends. None of them have depth beyond their singular defining traits (handicapped, punny, outspoken), which also applies to the sincere and eventual “buddy becomes boyfriend” Ty (Rhenzy Feliz, who gets slightly better as the film progresses). I never believed they were friends, but I did believe these could be real people, and I think that’s appropriate for a movie of this meager magnitude.

Adapted by Matthew Quick from his own YA novel, Brett Haley takes the material and makes it into yet another processed yet palatable story chock full of idealism and a rousing sense of hope. Haley’s films show flashes of a director on the cusp of something all his own, but the stories he tells always (with the rare exception of Hearts Beat Loud) embrace forced and contorted melodrama, making All Together Now something you roll your eyes at too often to be taken as serious drama. But the flaws add a certain level of clumsy charm, and makes for a film that’s emotionally moving when we get to see its two left feet take the right steps. All Together Now just wants to make us feel good, and at the very least, it accomplishes what it sets out to achieve.

“It’s about finding hope, even in the darkest of times.”