“How hard could it be to hide my burgeoning insanity from the unforgiving ecosystem that is high school?”

Visually creative, deeply empathetic, refreshingly familiar. Those are the taglines I would scrawl inside the stalls of Words on Bathroom Walls, an imperfect piece of storytelling which, oddly enough, is able to mostly deflect and spin its flaws as baby steps towards the possibility of achieving positives. I’ve seen so many High School romance movies similar to this one, yet I’ve never seen one told from this unique point of view. That’s the draw, the pull, the cautious invitation. Worlds on Bathroom Walls brings something new to this genre, and it doesn’t waste its time trying to reinvent the wheel; it’s too smart and novel a feature to dawdle around like that. To be a teenager is to feel things hard, which explains why Words on Bathrooms Walls captures that universal reality with a keen sense of kindness and understanding. It’s an unusually perceptive picture.

There are a lot of layers to Adam (Charlie Plummer), the soft-spoken new kid who transferred schools during his senior year. He’s fascinated with food, doing more studying in the kitchen than with textbooks. He mostly cooks for his widowed mom Beth (Molly Parker), always a happy customer, and she’s finally in a relationship once more with Paul (Walton Goggins), Adam’s unwarranted nemesis. Scenes inside their home are usually as uncomfortable as you’d expect. What troubles Adam most though – at least for the time being – is his diagnosis. Schizophrenia, the kind where he sees the voices he hears. Rebecca (AnnaSophia Robb) cheers him on, Joaquin (Devon Bostick) suggests rash decisions, and Bodyguard (Lobo Sebastian) carries an aluminum bat at the ready. There’s also a wave of Darkness that visits unannounced from time to time, resulting in trauma and fear. Adam struggles with human connection because his darting eyes are always watching a reality all his own. But then he sees Maya (Taylor Russell). He finally feels seen and heard by someone real. She wants in. He wants to hide his secrets. They join hands. 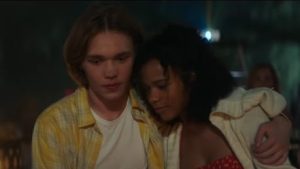 I’m not sure I’d go so far as to say that Russell and Plummer have amazing chemistry; their scenes don’t scream or exude first love even though they are romantically staged. It helps that their feelings still convey a very believable affection, and that’s a credit to two actors who know how to internalize and emote their dialogue. They seem to be living the words rather than just coldly delivering them. That definitely applies to Plummer, who speaks to the camera – while, in turn, breaking the fourth wall to speak directly with the audience as his surrogate therapist – and especially for Russell, whose patient and profound delivery is quickly cementing her as a hypnotic talent. They meet each other in a joint place. Words on Bathroom Walls is a tiny movie, yet the leads make the whole endeavor feel bigger and more revolutionary than it ever is. That’s no small feat.

The direction by Thor Freudenthal is ambitious even if the tone is a bit jumbled, and the script lacks the finesse necessary to develop key components. Adam’s obsession with food and culinary school and becoming a chef seems like more of an afterthought than it does an ambition or vocation. The over-the-top ending is unbelievable yet so very sincere. And I still can’t interpret the point of the film’s title. After all, it literally comes into play once during the entire movie, and only briefly suggests how our own adjectives are more important than those others label us with. It’s a powerful sentiment conveyed in a not so meaningful way. There’s so much humanity in this film though, displaying the good and the bad in joint measure, and stronger structural bones might have elevated it into one of those touchstone pictures people revisit again and again. Nonetheless, in a subgenre full of so many shallow imitations, Words on Bathroom Walls stands out for its maturity, its compassion, and its tenderness. If only the rest of us could grow up and do the same.