“We have a destiny to fulfill.”

It’s been nearly 30 years since Bill and Ted last graced us with their bodacious slacker vibes, and I have to say not much has changed. They are older and, unsurprisingly, no less the wiser to their vastly important place in the universe as grown men than they were in their teens; they’re just along for the ride, happy to shred whichever wave they happen to catch. But that laxness doesn’t quite fly when you’re a married, middle aged adult with a child. These guys – these brothers – need a reset with some proper direction and guidance. Bill and Ted Face the Music could’ve used help in that very same regard. This is a journey worth taking, but the dull final destination will leave you wanting more. Maybe that’s poor storytelling or maybe that’s their way of ensuring another sequel or spin-off. Who knows? Definitely not Bill or Ted.

One can only assume the two best friends had to have shared the slap to the face superlative “Most Likely to Live in Parent’s Basement” during their high school years. Contrary to popular opinion though, Bill (Alex Winter) and Ted (Keanu Reeves) have grown into kinda sorta semi-respectable men. They aren’t in basements, but they do live right next door to each other, still trying to make Wyld Stallyns a bankable band. Their wives Elizabeth (Erinn Hayes) and Joanna (Jayma Mays) are at the breaking point with this forged in steel bromance, especially when couples therapy turns into a coupled couples therapy session. You just can’t break up this band. 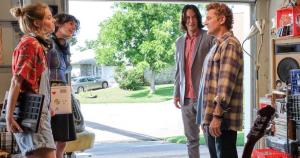 Bill and Ted Face the Music is at its best during the first 45 minutes or so because it forces these recognizable characters into previously unimaginable positions. They look the same, sound the same, still jam out. But now they’re husbands, fathers, and as the title suggests, face every artist’s predicament. Do they settle for comfort or risk losing it all? That decision is rushed by Kelly (Kristen Schaal), daughter of Rufus (the late George Carlin), informing the two boneheads that the universe will cease to exist if they fail to finally perform the song to save all beings through time and space. Of course they choose the shortcut route, trying to steal the tune from themselves in the future, and it really does generate a few hilarious moments. And yet I wish more time had been given to the dynamic daughter duo of Billie (Brigette Lundy-Paine) and Thea (Samara Weaving), both clearly molded from the flesh and bones and slow-witted souls of their fathers. Both performers nailed their roles, and since the film falters in the increasingly redundant second half, I think they could have helped right the ship. Or at the very least steer it clear from the impending iceberg straight ahead. 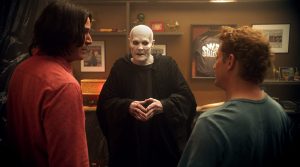 I wouldn’t go so far as to brand Bill and Ted Face the Music as a bad movie; there are genuine laughs and the performances all deliver the comforting taste of what audiences devoured decades ago, which doubly applies to William Sadler’s contentious yet convivial portrayal of Death. It’s enjoyable as an easygoing movie and I’ll likely watch it again. But the back half of the story is essentially a lazy retread of both previous entries, and while the build involves interesting historical figures, the final performance – literally the most pivotal part of the script – is also the most scattered and sour. How do you save the universe with an instrumental song more forgettable than a ring tone, a commercial, a radio earworm? The answer is that you can’t. Bill and Ted can’t face the music, and had it been reduced even further, I’m not sure they could have been more memorable than the muzak played in elevators and department stores.