“He makes me feel like I’m the crazy one.”

Famed novelist H.G. Wells’ 1897 classic piece of horror science fiction has once again been ushered into modernity, altering the dated landscape with new technology and a stalking monster reflective of the now’s Me Too era. In this iteration of The Invisible Man, the seed of the idea for invention is borne from a controlling sociopath, and it’s sown through some fantastic, chilling, slow-burning moments from the start. The first half is a great success. But then the film loses its logic, defying rules and reason in a second portion packed full of action while abandoning the ambiguity and the potential lunacy of the psychological torment established early on. It’s a vindictive picture, and one that doesn’t quite earn the emotion of its final shot. 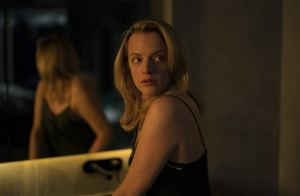 Tight editing and clever cuts make the drawn-out, dread infused beginning the high point of a picture which, unfortunately once the opening sequence has finished, still has nearly two more hours to go. The camera focuses on the terrified and trepidatious Cecilia (Elisabeth Moss). She’s the victim of extreme emotional abuse at the hands of her partner Adrian Griffin (Oliver Jackson-Cohen), a supposed genius and a worldwide leader in the field of optics. Cecilia is Adrian’s hostage, never hand-cuffed inside his sprawling and advanced home, but whose every second is monitored and altered to his liking. A concrete wall surrounds the remote property and security cameras capture movement in every corner. Adrian has enslaved her, and the nearly silent open finds Cecilia executing a carefully plotted escape from her oppressor. It’s the kind of Hitchcockian, edge of your seat stuff thrillers should aspire towards. 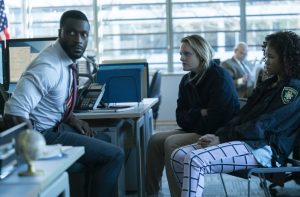 If you’ve seen the trailer, it’s no big spoiler to say that Cecilia finds a form of freedom in hearing Adrian has killed himself. She reconciles with her sister Emily (Harriet Dyer) and is invited into the home of her longtime friend James (Aldis Hodge), a single father cop raising his fashionista daughter Sydney (Storm Reid). What makes the first half of the film so creepily effective is the way the camera lingers on the emptiness of the spaces which Cecilia’s eyes fixate on. It’s 60 minutes of that unsettling feeling where you’re somehow able to sense that you’re being watched. The biggest difference is that The Invisible Man isn’t just about having all-seeing eyes in the back of your head, but that it considers and questions the authenticity of the apparent vacancy in the entire room. Writer/director Leigh Whannell captures this with increasing intensity and Elisabeth Moss – remarkably reliable in an ultimately unsteady picture – sells the shots with her haunting and progressively gaunt visage. Her performance alone makes the movie worth seeing, even when the talented Whannell writes himself into an inevitable corner for the film’s finish. 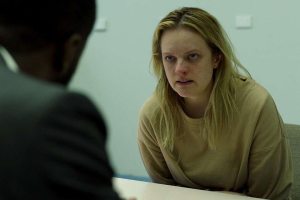 I’m still not quite sold on The Invisible Man as a whole. It features the kind of VFX work that’s so good it’s easy to overlook, and the costuming (you’ll know what I mean when you see it) reflects the type of crazed madman who’s desperate to forever be a fly on one woman’s wall. However, much like Steven Soderbergh’s moderately more interesting picture Unsane from 2018, Leigh Whannell similarly struggles with sticking the landing. Both movies have great setups, feature astonishing female performances, and ultimately lose the narrative to the kind of violent action sequences that can be seen but hardly believed. The Invisible Man and Unsane both tackle the everlasting, post-traumatic stress effects of women stalked by predatory men, and both shift too much of the focus on the monsters lurking in the shadows. If anything, the narrative faults in these two tales of vengeance make me appreciate Netflix’s The Perfection that much more. It’s so strange that the main justification to see a film titled The Invisible Man is for the greatness of its female lead. Sounds a bit backwards to me.

“Don’t let him win by bringing him back to life.”