“You’re a disaster waiting to happen.”

Marginally better than the previous entries in this flat-footed franchise, which really isn’t saying all that much, Angel Has Fallen continues – and potentially brings to a close – the adrenaline-pumping exploits of Secret Service agent Mike Banning (Gerard Butler). More than the other films, Angel Has Fallen tries to humanize its hero worship complex by stirring some inner turmoil within Banning himself, and Butler – whose acting chops deserve better material than this blank bullet affair – does the best that he can in a predictable story that’s been haphazardly thrown together with little effort to create something even the slightest bit new. You’ve seen this movie before, probably a few dozen times over, just with different named characters. So why bother? 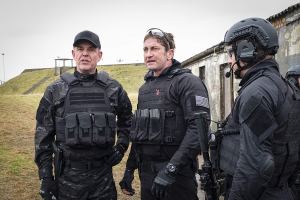 Ever the prototypical and American idea of a hard-ass, Banning scoffs at the insomnia keeping him awake most nights and interfering with his work. Back pain had led him to abuse prescription painkillers, which he hides from his wife Leah (Piper Perabo, relegated to this type of film’s stock wife character who is given no real personality outside of her spiraling husband). After catching up with his old comrade Wade Jennings (Danny Huston), who’s looking to privatize/profit off of warfare, Banning’s stressors continue to pile on when President Trumball (Morgan Freeman) offers him the position of Secret Service Director. There’s a good chance you could accurately guess where things go from here. 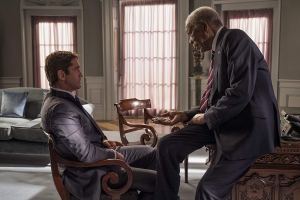 While it isn’t as offensive as the prior two escapades, and is less blatantly jingoistic, Angel Has Fallen suffers from a bloated run time and a cacophony of characters who legitimately add nothing to the overall story. Tim Blake Nelson is the easily diagnosed and corrupt Vice President Martin Kirby, except he has no real motive. Jada Pinkett Smith plays FBI Agent Helen Thompson, who rushes to conclusions about Banning’s involvement with an assassination attempt and then gets abruptly axed from the film altogether. Morgan Freeman spends the majority of the movie in a comatose state. And the antagonist played by Danny Huston, who’s terribly miscast here and has been so many bad guys throughout his career that we can sniff him out with a stuffy nose, is more believable as an idea than he is as the mastermind behind all of the chaos. Movies should add up to more than a paint by numbers picture. 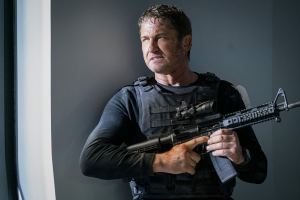 I wouldn’t call this franchise outright lazy; each entry has been brimming with action, albeit absolutely forgettable every step of the way. And for all of the lackluster writing, Butler’s no-nonsense performance as Mike Banning manages to be memorable in its own right. But Summer blockbusters need to be better than this one. Moviegoers deserve rejuvenated car chases, stronger choreography in hand-to-hand combat, as well as a story that’s less lethargic and more in tune with the urgency of what’s happening on-screen. Ric Roman Waugh’s film fails to adequately critique our current government as it so clearly intends, and undermines its stance even more by being patriotic to the point of nationalism. Like the popcorn movie that it is, the snack worthy and insubstantial Angel Has Fallen is a big, bland bucket of empty calories that you thoughtlessly consume and, in retrospect, never actually enjoy.

“This already blew up in our face.”