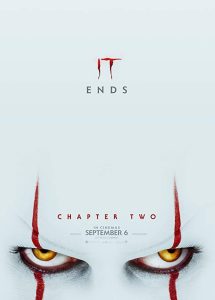 “If It ever comes back, we’ll come back too.”

Dense, disturbing, and terribly disappointing in equal measures, It Chapter Two revisits Stephen King’s small fictional town of Derry, Maine precisely 27 years after the first film took place with the hope of finally killing the local monster once and for all. This is a dense film in that too much of the author’s tome of a novel is poorly adapted with too little explanation. It’s disturbing in the way that true terror can infiltrate and linger in the periphery of your nightmares. And yet ultimately, It Chapter Two ends up as one of the most disappointing pictures of 2019, not only because the picture is a poorly mixed cocktail that’s been viciously shaken instead of carefully stirred, but more so due to the troubling resolution of the film’s shallow final act. I hate how badly I wanted it to end.

Despite the fact that I disliked the movie as a whole, it’s hard to ignore just how much this sequel tries to separate itself from the previous picture from the very onset. It Chapter Two descends on opening night of Derry’s annual canal days festival with a volatile moment inspired directly by King’s novel. The openly gay Adrian (Xavier Dolan) and his partner Don (Taylor Frey) are verbally harassed and followed by a group of homophobic locals. A bloody and brutal hate crime ensues, with the mix of terror and animus almost acting as a smelling salt for the locust-like Pennywise (Bill Skarsgård), wrestled from his slumber so that he can once more drool at the sight of and hopefully feast on the flesh of those who are marinated with the indistinguishable taste of fear. There’s a staleness to the air that night. It is back.

Perhaps the greatest achievement of It Chapter Two may very well be the choices made by Rich Delia (serving as the casting director for both movies). James McAvoy headlines the picture as Bill, now an author who can’t seem to pen a quality ending (echoing criticism of King’s vast body of work). Beverly (Jessica Chastain) plays housewife to a violent man no dissimilar from her abusive father. The group’s own clown Richie (a scene stealing Bill Hader) grew up to become a popular stand-up comedian, often performing material written for him. The little asthmatic Eddie (James Ransone) is now a risk analyst and married to a carbon copy of his bossy mother (that the same actress plays both roles is a great touch). Ben (Jay Ryan) is the most physically changed, getting past his chubby phase to become a handsome real estate developer. Mike’s (Isaiah Mustafa) the only who didn’t leave Derry, and becomes the sole proprietor of what happened all those years ago. And then there’s Stanley (Andy Bean), still the most terrified of the bunch, who doesn’t make it for the impromptu reunion for reasons both self-defeating and questionable in the long run.

For how clumsy It Chapter Two is overall, flashing back and forth from now and then with reckless abandon and little to no structural guidance, the film does an admirably sprite job of introducing us to the Losers in their adult form. Recognizable character traits are re-established, the editing is lean, and it’s really the only point in the picture where the pacing matches the big strides taking place on screen. Elsewhere though, especially in the truly tedious sequences when, one after another each loser must separately confront a goading It, the pacing drags to an absolute standstill. This sequel is by and large about repressed adult characters who are stuck in a childlike, traumatic state of mind, and the film grinds to an abrupt halt as the story foolishly and repetitively takes every single fork in the road as they face their respective fears. A better movie might have captured the important scenes with an interwoven through-line, as this one did during the intros, but It Chapter Two chooses to wander about aimlessly, leaving no crumbs behind to find its way back towards a balanced and unified center.

While the first film was basically Stand By Me with hints A Nightmare on Elm Street, It Chapter Two is far more fantastical and bold and batty to the nth degree. The problem is that director Andy Muschietti – who’s proven himself more than capable of blending genres and who has a gift for manufacturing tension – seems to be blindly swinging for the fences. And while it’s admirable that he chose to take this picture in a completely new direction, that doesn’t fix how far off the beaten course and into the poison-ivy filled brush this sequel goes. The garish CGI looks horrid by contemporary standards and will quickly age in a bad way, the poorly adapted script relies on the inscrutable mythology of King’s novel without grounding it in any discernible rules or logic, and this roller coaster of a movie loops the early scares for so long that they almost begin to lose power when they occur ad nauseam. It all adds up to a movie that is as shockingly violent as it is interminable.

The cast is solid, although a disconnected performance from James McAvoy and some unforgivable de-aging effects layered onto a few of the younger actors come across as major detriments. And yet It Chapter Two has bigger issues when it comes to the story’s reverence to the source material, the squandering of an indelible villain, and troubling thematic resolutions. First and foremost, Muschietti’s film has no idea how or where to address the ineffable aspects of King’s novel, and in the process, spends too little time allowing Bill Skarsgård’s maniacal proclivities to flesh out this carnivorous clown. His performance is iconic even if he gets far less time than he deserves. And yet what undermines It Chapter Two the most is how the Losers go about becoming victors. I have not read King’s book, nor do I intend to at this point, but that the film ends with our outsiders graduating into the roles of grade school bullies, spewing vitriol at the top of their lungs in order to make an “It” feel small, shows how hate wins despite how cozy and happy the ending pretends to be, trying to fight perilous darkness with light and failing miserably. So what does it say about the film – and our current state of popular culture – that hate can only be defeated by a stronger, more united sense of groupthink enmity? That is a deeply pessimistic, rhetorical question I’m not quite sure I want to be answered by something as errant as It Chapter Two. You’ll float too, intermittently so, and you’ll wish the story had a landing zone that wasn’t littered with 99 red balloons. Sometimes less is more.

“Sometimes we are what we wish we could forget.”