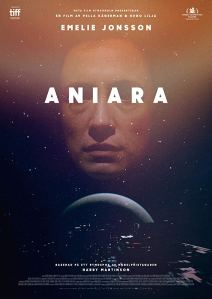 “We’ve built our own little planet.”

Aniara isn’t a nihilistic film, nor is it completely devoid of hope, but it’s also one with an uncompromising outlook on mankind’s self-destructive tendencies, as well as how those actions affect mother nature and how we insatiably guzzle from the teet of the planet which gives us life. And while the script was too uneven for my liking at times, this lost in space epic shows the grand adaptability of our species, all without shying away from commenting on our abject loneliness, our easy corruption and our uncanny ability to demolish everything we come to pass. This is thoughtful, well executed science fiction. 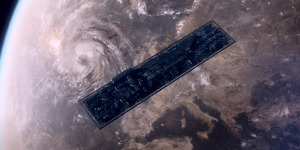 Like the many greats of this genre, which Aniara is a few rungs below, the film projects the problems of the present onto a lofty and futuristic landscape. As is said early on, “You usually need to view it from a distance,” which works in relation to the imminent journey and the people’s predilection towards ironbound routines. This proves true in Aniara as countless residents of a dying Earth ascend into space, waiting to board the titular ship with a 3 week long relocation trip towards Mars. Think of it as a Carnival Cruise through the cosmos. Clubs, restaurants, shops, arcades. Open waters are replaced by endless and twinkling black voids. You name it, they got it. But like a roller coaster ride unbound by the rules of gravity, the Aniara is suddenly sent off the rails with no way of coming down or regaining control. They drift aimlessly.

The lead of the film is often called MR (Emelie Jonsson), short for her work title of “Mimaroben.” She’s a one stop shop therapist of sorts, using what looks to be an organic and fluid entity called Mima that hovers from the ceiling as a communal space for reconciliation and remembrance. The further they drift from home, the more people are drawn to Mima and her (maybe that pronoun is unwarranted, but the use feels justified) ability to transport them to memories of Earth for hours on end. Mankind drilled and foraged and drove Earth to the point of being uninhabitable, and they do the same with Mima. Aniara covers a lot of things in its voyage of space and time, but it is first and foremost a scathing critique of the innate greed fueled by the consumerism of capitalistic powers around the globe. Only extreme lengths of time and endless miles in what’s eventually called a sealed sarcophagus can save us from their overwhelming influence.

Aniara lacks the solid and dependable structure this type of lofty film typically needs in order to scale such great heights, yet it rarely relies on lazy exposition either, especially in the all too important early scenes. The world building is solid and you believe that the sets – which look like fancy mall corridors and Kubrickian hallways – really are drifting through space. That’s a testament to Swedish director Pella Kagerman and her crew’s ability to blend the great visual traumas of existence with our inherent search for something more. In this film that can be found through a hunger for knowledge, any one-sided relationship with power or substance abuse, and the cults born on screen from a valid place in desperate need of meaning and purpose. Aniara might be too wayward a movie for some, but it’s always accessible and eager to chat with those willing to consider what could exist beyond the distant sky.

Something tells me that Aniara was a few necessary drafts away from becoming a more thoughtful script and therefore a more impactful film overall. As is, it’s a solid appetizer with a whole lot of diligence and properly learned execution, but the picture’s also under-seasoned to a fault, almost knowingly so. The movie can be bland, a bit too plain, and too scattered to really drive home any single message completely. And yet Aniara has the presence of mind to speak loud and proud. Don’t count this one out. It’s worth seeking and experiencing. My gut tells me this will be some of the most substantial sci-fi we’ll see this year.

“There’s no protection from mankind.”