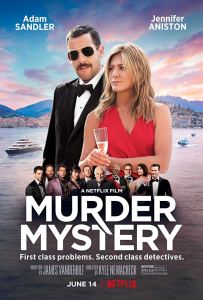 “I know all the answers, I just freeze under pressure.”

Let me start by saying that Murder Mystery is, for the most part, as run-of-the-mill as its factory-farmed, plug and play title suggests. There’s nothing new or substantial offered here, and in fact most of it is a rehashed, simpleminded trek through an Agatha Christie novel, made even easier and accessible by being of the audiobook variety. It’s less taxing in that way. And yet, to my own surprise, I enjoyed this latest product born from Adam Sandler’s massive Netflix deal. Murder Mystery is easy and light entertainment that’s funnier than you might expect, all without trying to fraudulently feign being too thoughtful either. It is what it is and not much else. 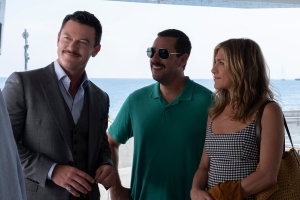 The setup is familiar to anyone who’s seen a Happy Madison production. Adam Sandler plays the typically schlubby, cheapskate Nick Spitz, an everyday Joe police officer who can’t pass the test to become a detective, and whose aim with a gun is practically unsighted. He’s been married to the hairdresser Audrey (Jennifer Aniston) for 15 years and has yet to follow through on the big European honeymoon he once promised her. Grand gestures by close friends convince him to book a last minute trip, of course in coach seats. But Audrey stumbles into first class, meets the dashing Charles Cavendish (Luke Evans), and their planned bus trip across the pond turns into a whodunit on a massive yacht full of well-to-do weasels. The American couple tries to crack the case. 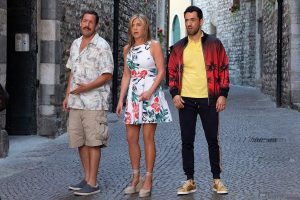 None of the ancillary characters, or in this case the hodgepodge lineup of possible suspects, carry more than a single note. But they’re preformed well all around, especially by Luke Evans as the slighted heir, Gemma Arterton as a gorgeous B-movie sphinx, and the always reliable Frenchman Dany Boon playing the chain-smoking Inspector de la Croix. There’s also solid direction from Kyle Newacheck, who with this film has vastly improved from his ghastly feature Game Over, Man! in terms of style and substance, although the latter category might be lumped in a bit generously. It’s a step in the right direction for the young filmmaker, and one of the more modest, easily forgivable Sandler flicks to come around in quite some time. 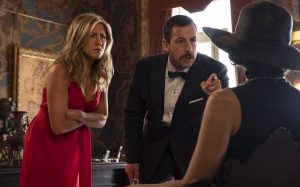 There’s some dumb potty humor (with one such scene literally taking place in an airplane lavatory), a few pieces of the story don’t make much sense or ever add up, and the film’s final shot is an unnecessary nod to an already obvious companion piece in Murder on the Orient Express. So while Kenneth Branagh’s recent remake of that Christie classic had immaculate production design and artistic camerawork, I still prefer Murder Mystery’s nickel and dimed version of the story, mostly because of the visible chemistry between Aniston and Sandler. They’re having genuine fun together, and for the first time in more than a decade, a live-action Adam Sandler comedy made me laugh with it instead of laughing at it or shaking my head at the story’s immaturity and utter nastiness. I honestly haven’t thought that since 2006’s Click. Maybe 13 isn’t such an unlucky number after all. Murder Mystery is no Clue, but it’s on the right track.

“I mean, that sounds like it just fell right out of a mystery novel.”