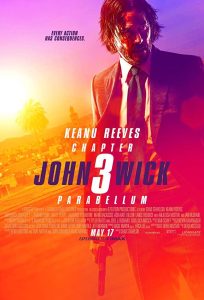 “He knew the rules. He broke them.”

I admired the flawed John Wick. I enjoyed John Wick: Chapter 2 a bit more than its predecessor. And had it been a touch shorter, I might have even loved John Wick: Chapter 3 – Parabellum, an absurdist action movie with a title that’s just ludicrous enough to match all of insanity that takes place on-screen. It’s absolutely assaulting, remarkably and inventively violent, and darkly comedic with corny dialogue and a bounty of gallows humor. This is the kind of movie that makes you go “ohh” and “ahh,’ and while it’s a tad uneven, I honestly can’t imagine that a better or more adrenalized action flick will be released this year. It’s a murderous spectacle featuring blood, bullets and a balletic gracefulness. Turns out third time really is the charm. 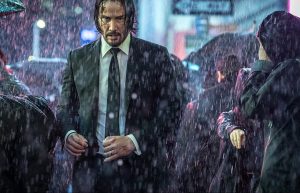 John Wick (Keanu Reeves) is on the run after being gifted a friendly head start, limping along through a heavy downpour, and Parabellum picks up right where the last film left off. Having broken the rules of Winston’s (Ian McShane) The Continental hotel, John is desginated “Ex Communicado” and must face the repercussions of this underground world’s faceless High Table. With a $14 million dollar bounty on his head, John has few places to go, opting to seek out new faces in the form of old friends in low places. The farther he goes, the more apparent it becomes that John prepared for this moment. He built bridges in New York and around the globe fully aware that he might one day have to burn them to the ground. 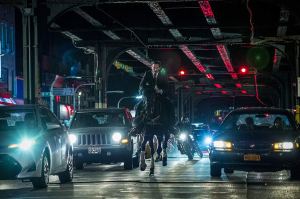 The bullish beauty of Parabellum in its opening act comes from the fact that, for the first time thus far, John doesn’t have a foe to hunt or to ultimately confront. He’s like The Running Man, a boogeyman playing a life or death version of the kiddie game “Ghost in the Graveyard” where his main objective is to not be found. This proves impossible though. Everyone and their mother wants to kill the immortal and tailored assassin, to extinguish the legendary wick. John flees by foot, then on horseback, and ultimately revs his way on a bike while 6 killers wielding kitanas follow behind in pursuit. It’s nonsense of the most thoughtfully bombastic nature, and the film borders on the masterful when John Wick gets to be a reactionary, resorting to gunfire and judo and a flick of his long black hair as if they’re second nature. 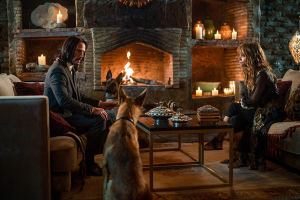 The film always wants to dive deeper into John’s unspoken mythos and this hush-hush world throughout, which is both admirable and increasingly tiresome. John offers a hefty crucifix to the Director (Angelica Huston), securing safe passage to Casablanca. There he confronts a friend named Sofia (Halle Berry), pushing a “marker” across her tabletop, which basically symbolizes a blood oath favor that’s to be fulfilled whenever is asked. She resists but adheres to her word. Together, and with the help of her faithful, well-trained canine sidekicks, they bulldoze through countless henchman. The sequence is mesmerizing, chaotic, blissful. This isn’t a murderous killing spree; it’s a carefully choreographed dance battle featuring loads of gunfire and biting dogs and slick hand to hand combat. 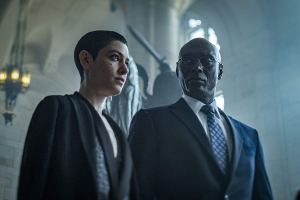 What’s frustrating about Parabellum is that, albeit ever so briefly, the movie feels too compelled to adhere with easy narrative norms, sacrificing the spectacular for the procedural. By doing so the story adds characters who with little depth but who also bring the picture’s heart rate down to . The Adjudicator (Asia Kate Dillon) is a spokesperson for the High Table and really does nothing but muddle and blur the plot, recruiting Zero (Mark Dacascos) to kill John because, well, that’s what high quality assassins do. One could argue that this is a necessary respite from the blitzkrieg of action throughout, but that doesn’t make these parts any less boring either, taking up space where the could be more scenes like the one where John Wick fights to the tune of Max Richter’s “Winter Pt. 1.” John’s an honorable man, so not only does watching him fell countless men to a recomposed version of Vivaldi’s classical tune make sense, but borders on the edge of pure brilliance.

A part of me fears that the writers behind the John Wick universe – which I can almost guarantee we’re going to see more of sooner than later – will never quite find the right rhythm. They need to study Mad Max: Fury Road, one of the decades finest films, and understand how to make a movie that’s incredibly dense and incessantly quick. Both are attainable in the same long exhale, and the only thing holding director Chad Stahelski’s second film in the franchise from achieving true greatness is that we never come to really care about the deeper yet slight human aspects of the movie. Like a shoot-em-up arcade game come to life, Parabellum reloads and redefines what makes its imaginative action so groundbreaking and jaw-dropping, and I hope possible sequels might ditch the few lulls of the story-mode for a 90-100 minute long exercise in kicking ass without taking names.

“Sometimes you have to kill what you love.”