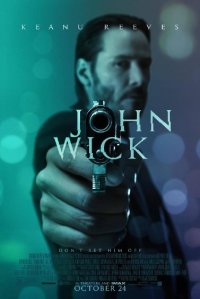 “That nobody is John Wick.”

It’s been awhile since an action movie came along that didn’t try to be more than it really is, and John Wick is as dynamic and balls to the wall as the trailer would make you expect. Movies like this are almost always a tale of redemption. That’s certainly the case here and with most B-movie flicks. Characters that populate these films are normally deeply flawed, and that’s why the redemption story is so attached to this genre. Flawed characters, like John Wick, usually lead flawed stories that result in flawed films. It’s been incredibly overhyped, but John Wick is still entertaining as hell and a welcome back to form for its star Keanu Reeves.

John Wick is newly widowed. A last gift arrives after the passing of his wife, a final piece of her, and it’s an adorable puppy (think audiences would’ve felt the same had it been a cat? The dog lover in me says no). He just wants to spend his days alone and with his companion, driving around in his old muscle car and mourning the loss of his life partner. That’s interrupted by a cocky and arrogant kid named Iosef Tarasov (Alfie Allen), son of head Russian gangster and John’s former boss Viggo (Michael Nyqvist). Iosef breaks into John’s house, assaults him, steals his car, and worst of all, murders the pup. No big deal right? Iosef just one-upped a nobody. His father reminds him, “It’s not what you did, son. It’s who you did it to.”

Thieves and crooks should take away that you NEVER murder a man’s dog. John is a former hit man out of the game for the last 5 years, successfully completing an impossible job to retire and make a life with his spouse. But he’s back, and this time it’s personal. Stand in his way and you’ll join the murder count that rose so quickly I couldn’t keep track. The path to revenge he takes is excessively violent and plunges an adrenaline shot into the chest of the story. This is the guy that dresses up to go on a killing spree. Uses silencers on his pistols even at close range. Pays with gold coins instead of paper bills. John Wick isn’t your average guy.

First time directors David Leitch and Chad Stahelski create such a unique storyworld from novice screenwriter Derek Kolstad’s lively script. John has clout built up, able to politely tell the cops he’s attending to things after killing a load of assailants. He’s respected by Viggo even though the Russian still puts out a contract on him. There’s even a hotel that caters to men, and women, in the killing business. It’s a little slow to develop, but the directing tandem really get into stride once they’re doing what they know best. Having been stunt coordinators on countless films, they handle the fight sequences with a grace and precision that I haven’t seen since a movie like The Raid 2. The visuals in this movie are incredible and I can certainly see it being the jumpstart to a potential franchise.

I mentioned it in my review of The Equalizer, but why are so many action franchises starring middle aged men? John Wick certainly isn’t an old character by any means but is nonetheless played by a 50 year old. Yes, Reeves is somehow at the half century mark. That’s no critique against him. He’s obviously a good guy and has been stuck playing roles that don’t serve him well (47 Ronin and Man of Tai Chi come to mind…). It’s crucial to the film that we believe Reeves as John Wick. The guy is heralded as the best hitman ever. Almost invincible. I mean it as the sincerest form of flattery when I say that this movie doesn’t break the bank at the box office without Reeves attached. Honestly I’d be surprised if it had even been made at all, and if it had, I guarantee it would’ve be a straight to on demand feature. Few actors have Reeves’ natural cool demeanor and can still flip the switch to let the rage pour out. His starpower is undeniable.

Sometimes I find myself enjoying a movie even as I get angry at all of the problems it has. My main grievance? A desperate need for more time (15-20 minutes would’ve sufficed). John is the only developed character, and the rest, especially his dog, only serve as breaking points in the story. There are other assassins, a chop shop owner, a hotel owner and the manager, a crime scene cleaner, a handful of bouncers and bodyguards. Not a single person, place or action matters outside of John Wick. This isn’t meant to be a negative review on an otherwise entertaining popcorn movie. It’s graphic violence is highly stylized and well shot and its protagonist has a completed arc from start to finish. But when the last shot cut away and the end credits rolled, I found myself saying in my head, “So that’s it?” John Wick is a fun time at the movies, but it’s so narrowed in on him that everything else is eventually relegated to pure spectacle and bites the bullet.