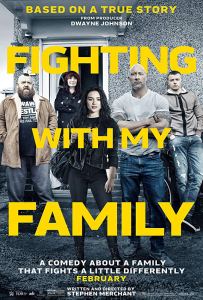 “Wrestling’s in your blood.”

As commercialized and accessible as Fighting with My Family might seem on the surface level, I’m fairly certain that I’ve never seen anything exactly like this movie before. The seesawing family dynamics are universal and the underdog story is a common denominator in the vast majority of sports films, but there’s never been a fusion between the two in the world of professional wrestling. I’m not surprised that it works either. Wrestling is a big broad package full of athleticism, showmanship, comedy and soap opera drama, and Fighting with My Family guides us around the ring’s ropes without entirely relying on old tired tropes. This one’s a deserving winner, even if its fair fight is actually fixed. 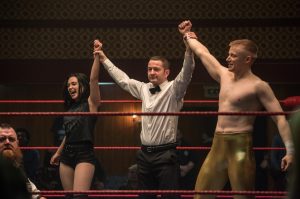 The Knight family don’t discuss the rules of wrestling whilst surrounding a round table; to them it’s an occupation, a salvation of sorts. Ricky (Nick Frost) runs a gym over in Norwich, England, a small city with less than a quarter million townspeople. He has three kids with Julia (Lena Headey), a retired ring diva. Roy (James Burrows) is the black sheep of the family, spending most of the film’s time in jail for petty theft. That leaves Zak (Jack Lowden) and Saraya (Florence Plugh) to shore up the family business. A brilliant editing decision leaps at least a decade forward, jumping from childhood to the cusp of adulthood, showing two siblings who fight out of love rather than malice. The two of them land a WWE tryout and only Saraya, now going by Paige, gets through to the next round. Excitement and jealousy are fueled in opposite, battling corners.

Outside of a stellar lead performance from Florence Pugh – a promising actress who’s quickly cementing herself as one of the best young talents working today (take a look at her impassioned, daring turn in 2017’s Lady Macbeth as proof) – there’s really nothing about Fighting with My Family that really breaks free from the mold. The characters aren’t granted enough depth for us to fully connect with, the drama feels forced, at times a bit tastelessly trite, and the middle portion of the movie surfs along the waves of conventional formula pulled from tried and true sports clichés. However, by blending the inner turmoil of 2008’s heavy hitting The Wrestler with the outlandish fanaticism of 2000’s Ready to Rumble, wrestling’s latest film venture allows its sad self to get slammed onto the mat, only to get up with a smile on its face, awakened and alive. Just because it’s staged doesn’t mean it’s not real. 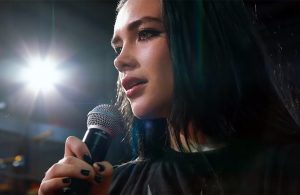 I remember my dad officiating brawls between my much bigger older brother and myself, making sure they were friendly and fun and safe. One match came with a big kick to the kidneys and the next day I peed blood. People thought I squeezed ketchup into the toilet bowl as a juvenile magic trick. And that’s the exact type of memory that separates this picture from the crowd; it is as pervasive as it is intensely personal. Stephen Merchant didn’t write a great script for his debut feature – it’s essentially a one-note syllabus for how and why you should be your authentic self – but he’s directed a clean, precise, entertaining film. Merchant has a penchant for how to craft a joke, and I admire that his first effort wasn’t a self-reflective exercise in autobiographical storytelling. Fighting with My Family marks a stellar, sincere, welcome return to the type of movie that too rarely gets made anymore.

“Just ’cause millions of people aren’t cheering when you do it, doesn’t mean it’s not important.”