“You struggle to show your emotions.”

Nowadays the origin story for a new superhero character has become an unenviable and arduous task. Most of Marvel’s mainstays have gotten the similar “nearly die only to be reborn” treatment, with less prominent characters receiving abridged introductions throughout these cinematic team building exercises. It’s important to make a good impression. To be memorable. But there are only so many new and different ways to say hello or to knock on the front door, and that tends to be the biggest detriment to the overstuffed glut of the comic book genre’s most recent film adaptations. Similarly bound by these restrictions, Captain Marvel survives its tedious first act against all odds, turning into an absolute blast when it finally decides to let its hair down. 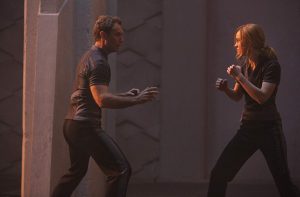 It’s never an encouraging sign when one of your first thoughts about a movie is, “what in the hell is going on?” Captain Marvel does this on purpose, although that doesn’t make the initial clumsiness any less inexcusable. The story opens on the planet Hala, capital of the alien race known as the Kree, whose elite Starforce has welcomed Carol “Vers” Danvers (Brie Larson) an honorary member. Carol’s entire memory is all but gone, and so she relents to this new life, training with her mentor Yon-Rogg (Jude Law) in a scene full of such unenthusiastic acting and unoriginal combat that I swore it was ripped from 2014’s Divergent (the image above shows an uncanny likeness). These Kree warrior heroes are on the hunt for Skrulls, a lizard looking species with the power to shape-shift into other beings. A mission goes south, Carol narrowly escapes, and crash lands through the roof of a Blockbuster on planet Earth circa 1995. 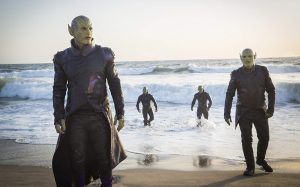 Up to this point, and for a little while after, most everything that could possibly derail Captain Marvel does. The story is as frustratingly tangled as a pair of headphones pulled from a pocket, the visual aesthetic looks oddly cheap, limp action sequences carry no imagination, and Larson herself seems to be uncomfortable while trying to execute Carol’s signature snarky attitude. Chalk it up to Murphy’s Law. Things don’t always go awry though, and the film finally finds its balance the more that young S.H.I.E.L.D. agent Nick Fury (Samuel L. Jackson, digitally de-aged so amazingly that he looks exactly as he did in Die Hard: With a Vengeance) gets involved with Carol. She looks for clues about her past while Fury soaks up the first of many extraterrestrial encounters to come. Captain Marvel models the relationship around films like 48 Hrs., and the two performers have solid enough chemistry to make the buddy comedy bits work. 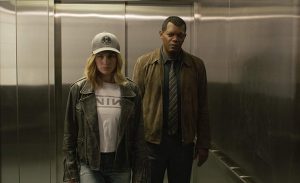 It’s best to stop there in terms of relaying the movie’s absurdly confusing plot. Anything else might divulge some significant twists and turns. So where does the film succeed? First off, Larson settles into her groove around the midpoint, embracing the singular elements of her character with great vigor. I look forward to seeing how she’ll play this role in the much broader scope of Avengers: Endgame. Likewise, Samuel L. Jackson is typically great as per norm. Yet the real scene-stealer in Captain Marvel – besides an adorable cat named Goose – is Ben Mendelsohn as Skrull leader Talos. He’s the film’s surprising laugh factory, the jokes emphasized by his peculiar verbal cadence and his knack for expressing physical humor beneath all of those prosthetics. The exceptional performances in Captain Marvel give the movie a much-needed adrenaline boost to charge across the finish line when so much energy was wasted earlier on.

The film’s been under unfair scrutiny by grown men trolling around on the internet, childishly and foolishly behaving as if they’re still members of the He-Man Woman Hater’s Club (intentionally releasing the movie on International Women’s Day is a brilliant move, putting salt on the wounds of such insecure men). Captain Marvel is a proudly feminist story – one excellent montage of Carol getting knocked down and standing back up throughout her life is extremely powerful – told with subtlety and nuance, yet it’s not defined by its ideologies either. Combine that with a timely aspect regarding refugees in crisis and you have a big time blockbuster that’s both entertaining and thought-provoking. So despite a botched entrance, a lunchbox full of nostalgic overkill, and some frequent miscues throughout (all of those dimly lit, closely shot fight sequences belong to the netherworld), Captain Marvel does enough to make its introduction worthwhile. Better yet, you’ll leave with high hopes for what’s to come.

“I’ve been fighting with one arm tied behind my back. But what happens when I’m finally set free?”