“We don’t really know what’s going on up top.”

Hunter Killer is like a thinly sketched, unthreatening version of the three-headed Greek monster Cerberus. It’s a beast that barks plenty but never packs a bite, and it’s more akin to an amalgamation of CBS shows than it is the action-packed war thriller the film’s been marketed as. It’s Jag meets NCIS meets SEAL Team, and the picture has such terrible balance between its three competing narratives that it flounders from the get go. Hunter Killer has no voice, and the movie projects its nothingness with little style or originality. This one’s a misfire.

Another entry in a long line of movies where America and Russia are on the brink of all out war, Hunter Killer just doesn’t separate itself from the rest of the pack in any meaningful or memorable way. Ships from both sides are sunk to the arctic floor. Sabotage is the main suspect. Then empty politics are deployed, as is another US sub manned by Joe Glass (Gerard Butler) to investigate the events. There’s a forgettable team of Navy SEALs sent to rescue the Russian President (Alexander Dianchenko). Back on land, John Fisk (Common) does a lot of bickering with Admiral Charles Donnegan (Gary Oldman, who seems to still be channeling his performance as Churchill without the prosthetics; he nearly yells himself to death). Hunter Killer is the type of film that feels underwritten only because it has been overwritten. We can’t know these characters or understand the moments when it’s constantly juggling the plot. 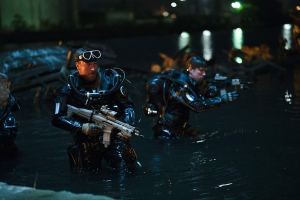 Plodding, confusing, and rather boring with its story’s multiple access points, Hunter Killer has zero motivation behind its actions. Having said that, I’m not so sure the fault falls squarely on the shoulders of director Donovan Marsh. Along with his crew, they actually create a believable atmosphere inside the sub. The lighting and the set design are so well done, along with the methodical movement of the camera, that I found myself believing I was below the surface as well. But then the film cuts away, airlifting us to a stagnant war room or a battle zone with nameless military men. Hunter Killer isn’t a bad movie when it comes to submarine warfare, but that’s only one-third of the equation. The rest is dumb enough to confuse division and multiplication.

Most perplexing of all is the film’s unwillingness to give Gerard Butler total command of the spotlight. He’s had an interesting career to say the least, wafting between action epics and romantic comedies/dramas, but lately he’s become a mainstay figure in intentional B-movie efforts. Hunter Killer surely belongs to that category – like so many of his recent films, it’s easy to picture them being released as far as 20+ years back – even though it never lives up to the potential fun we expect going in. Too self-serious and too convoluted for such a ridiculous film, Hunter Killer pretty much sums itself up in one moment. After a soldier carries out his orders he answers a question with a grin by saying, “Don’t ask me. I don’t know shit about politics.” Neither does this film. It’d have been better off if it hadn’t decided to play pretend.

“You blew up from the inside out. You were sabotaged.”