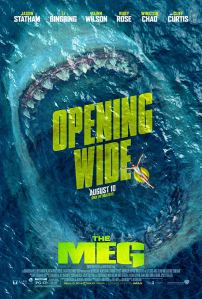 “There’s something out there.”

A movie that would’ve been better suited as a bad SYFY channel feature than a $100 million+ budgeted Summer Blockbuster, The Meg spends most of its time doing laps in a pool of mediocrity. It’s a bit of a murky grey area, never dramatic enough to be taken seriously or ridiculous enough to become truly comedic, and the movie runs so long that it begins to flounder and cry out for a lifesaver as waves of boredom come crashing in again and again. The laughs rarely hit, John Turteltaub’s ludicrous action is borderline indiscernible, and the tempo drags along like an anchor. More Jurassic World than it ever is close to imitating Jaws, The Meg puts scale before story, weighing the entire endeavor down. 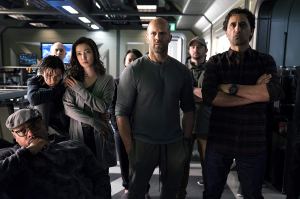 You’d think the movie would be more ominous and that it would give its finned antagonist a proper introduction. To grant us a glimpse of terror to holster on our hips until the inevitable confrontation. Instead the open is bewildering, far too long, and further wastes time by not completely developing its many characters or their surroundings. Jonas Taylor (Jason Statham) endures a monumental loss even while saving a large group on a deep-sea rescue mission. Demons turn him to the drink and drive him into hiding. Not long after, a man named Zhang (Winston Chao) and his daughter Suyin (Li Bingbing) head a state-of-the-art underwater research facility financed by eccentric billionaire Morris (Rainn Wilson). They look for rock bottom, pushing past Marian’s Trench to discover another ecosystem altogether. There’s an inevitability to their exploration; we know things will go wrong and are unsurprised when they finally do. 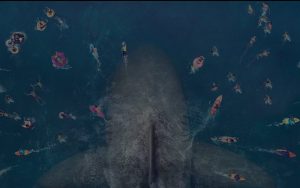 The Meg has a big cast with a few memorable traits to each of them – Dr. Heller (Robert Taylor) holds a grudge against Jonas, DJ (Page Kennedy) can’t swim, and Jaxx (Ruby Rose) is the de facto cool nerd – but the film really only uses them as bait. There’s hardly any chemistry between anyone interacting on-screen, nor is there between the sorely mismatched fling of Jonas and Suyin. It’s all just too safe and predictable, allowing us to correctly and easily presume the outcome of the action set pieces rather than to twist our arms as we incorrectly assume the finality of the events. Nothing about The Meg registers on the seismic scale it so desperately wants to be seen as. It’s a film driven by Napoleon Complex, super-sizing the kind of movie that’s already been done before, and quite better at that. 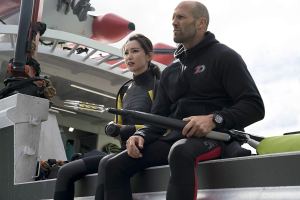 I much prefer 1999’s Deep Blue Sea to this latest shark attack (the recent 47 Meters Down and The Shallows are far superior as well). Hollywood has been following a troubling trend lately where everything has to be bigger to be better. The Meg rebirths the prehistoric predator of the open waters once called a Megalodon, and attempts to frighten us with the creature’s magnitude instead of its cunning. Deep Blue Sea worked so well because it had the same campy tone as The Meg, but most importantly, the sharks were more effective and terrifying because they’d been genetically modified to be smarter, challenging the crew for a higher place on the food chain. The Meg plays the role of Goliath to Deep Blue Sea’s David. We all know how that one turned out.

“That thing is the devil.”