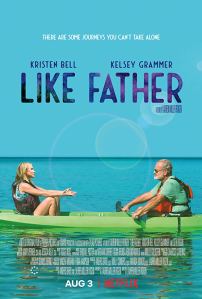 “Why are you here after all this time?”

Anyone who’s ever made a late night commitment after a few drinks and been forced to stick by its stupid side the next morning will understand and possibly even empathize with the drama in Like Father, a film which depicts the hostility of hate without any of the name-calling or directed meanness. It’s rough around the edges, and it’s very imprecise, but the movie has enough heart and honesty to overcome all of the missteps. This picture is about mistakes, and it has quite a few of them, so it’s no surprise that the story and the film itself find their way come closing time. 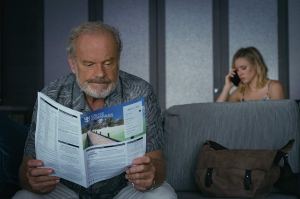 Left at the altar because she’s a workaholic, Rachel (Kristen Bell), can’t find a happy medium in her life. She’s all work and no play, her phone always under her fingers or pressed against her head. What does she do? I can’t recall, mostly because it doesn’t define her character. She’s in business and works herself to the bone and that’s all we need to know. Her Dad Harry (Kelsey Grammer) reenters her life for the first time since she was little, they both have too many drinks, next thing you know they’re sharing her honeymoon cruise as Father and Daughter. There’s nothing very fancy about Like Father, and it’s rather predictable in the cards it holds, but it grants two people the opportunity to reconnect and to play. 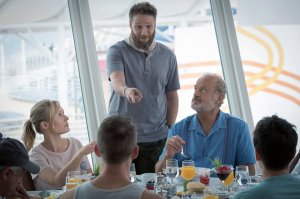 Rachel meets another single on the trip named Jeff (Seth Rogen). He’s a nice, lonely guy with a broken heart who invites himself to tag along with the group Rachel and Harry were assigned. They’re all empty characters made to provide laughs and never quite steal the limelight from the leads, and they fulfill these duties well. Like Father has a similarity to 2008’s Forgetting Sarah Marshall during these parts, or maybe it just feels that way because Kristen Bell stars in both pictures. This one’s nowhere near as funny or well-written as that comedy classic, but it uses escapism to approach heartbreak in its own way. 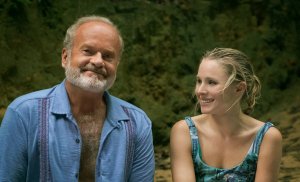 There’s enough good here to suggest that writer/director Lauren Miller Rogen (yes, she’s married to Seth) has promise as a filmmaker. Hopefully she finds a new editor and a better cinematographer, because the movie itself is extremely choppy, and yet she maxes out the obvious low-budget film for all that it’s worth. That she’s able to get such rich performances from both Bell and Grammer shows that she can also write for and guide her actors in the right direction. Most of all, Like Father represents the kind of movie that too rarely gets made anymore and almost never makes its way into theaters. Like 1994’s My Father the Hero, the picture is small and goofy and surprisingly dramatic, and thankfully Netflix provides such lighthearted fare a place to be seen by countless eyes across the globe.

“I hope you understand if we take some time with the decision.”