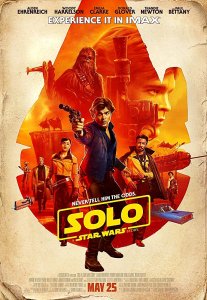 Before the picture begins and the origin of all things Han Solo starts to knock us over the head, Solo: A Star Wars Story wisely and sensibly brands itself as something a bit different. Read against a galactic backdrop, the film tells us that, “It was a lawlesss time.” And so, with rules taken as mere suggestions and a lack of crystal-clear order to the universe, Solo is a classical Western at its core. It’s a more grounded and gritty space opera than the originals that finds drama and romance and action all within close proximity of each other. Best of all though…the movie is flat-out fun. How often do we get a blockbuster of this magnitude that’s still capable of reminding itself to relax and play it cool? The balance can be mighty impressive. 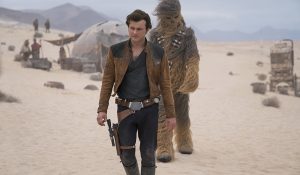 The hustling Han (Alden Ehrenreich) lives on Corellia, a small world dedicated to shipbuilding, and it’s a harbinger for the scavenger pilot life we know will eventually ensue. What a stark metaphor…to be stuck in such a place without getting to explore. And in a timely escape endeavor, Han flees the planet with his love Qi’ra (Emilia Clarke). He scams his way out, she’s apprehended, and the entire segment of the film comes across as a fair criticism of capitalistic immigration policies. Solo tends to be a politically charged film whether or not that was the intention in the first place, and I have to say, it actually manages to enrich characters without making them tired or tedious. They act with reason, little haste, and just enough sensibility to make things click. We’re swept up by the tide.

While it’s structurally thin yet narratively bursting at the waistline, Solo nevertheless settles into a comfortable groove once characters are established or renewed. Whose side is Qi’ra on? Does the cape wearing croupier Lando (Donald Glover) really want to participate in high stake theft? What drives the outlaw Beckett (Woody Harrelson) towards a life of do-or-die crime? Solo has plenty of questions and just as many answers – as well as a few serious surprises – during its run time, and the technical accomplishments outweigh the occasional lapses in logic. Bradford Young’s cinematography, as dim and smoky as a prohibition era speakeasy, creates portraits that are hostile and hazy and intentionally elusive. And while it’s impossible for outsiders to define the level of authorship Ron Howard had on the final product (especially given his late entrance into the director’s chair), he still influenced a movie that does all of the things Summer blockbusters are meant to do, even adding in some Sergio Leone elements for good measure. It oscillates, excites, entertains, and molds its sense of nostalgia in a comfortably modern cast. Solo ain’t all the memorable but it sure does go down smooth. 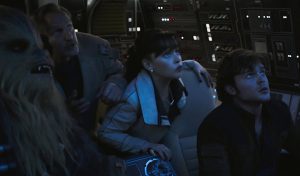 Something about encountering an even more youthful iteration of Han takes some getting used to. He’s physically more diminutive, sounds nothing like Harrison Ford, and the open act drops him into a No Man’s Land plagued by the aimless crossfire of hot-take criticism. This is diner service from a waitress who’s seen it all; Solo plops the plate before us and says “eat it or get out.” And I imagine some will resist Ehrenreich as the younger version of this iconoclastic icon. But just wait for his comedic timing, his boyish charm, and most of all that trademark smirk. Solo is reverential to the Star Wars catalog – even as a less than devoted fan, many of the standout references are uncanny – without becoming subservient. My highest praise is that the film feels so familiar and unique, so safe and different all at once.

“I waited a long time for a shot like this. I’m not about to screw it up, alright?”