A murder mystery. A psychological thriller. A revisionist and modern-day take on the classic tale of Beauty and the Beast. And exploding with one of the most unexpected and shockingly electric performances of the year, Beast is a film which I had never even heard of before it was sent my way, and it’s one I have since been completely unable to shake. In this loose narrative, captivity breeds and spawns menacing disdain for walls and rules, and eventually develops a clear affinity for the rush and ruthlessness of violence. It’s not about feeling pain; after being shackled for so long, Beast is about losing one’s self in the primitive nature of aggression and anger, and how the two can so easily become mistakenly intertwined with the sprite spirit of love.

Something’s the matter with Moll (Jessie Buckley). It’s her birthday and all she really emotes are ample amounts of unease and apprehension towards her domineering Mother (Geraldine James), her checkered past, and the forward advances of the policeman Clifford (Trystan Gravelle). To the kitchen she runs, downing a shot, then another, dropping a glass and squeezing a few shards in the palm of her hand. Finally tears flow..she feels something. Moll escapes into the night, her red curly bob dancing just behind her ears and her flowering yellow dress flailing with the evening breeze. She plans to unwind, to drink in excess, to twirl in dance, to untangle the straight jacket she’s so accustomed to dressing herself in as casual wear. The night runs into the early morning, and Moll’s aggressive suitor is chased off on the beaches of Western Europe’s Jersey Islands by a peculiar man who’s up poaching rabbits. The beauty meets the beast. 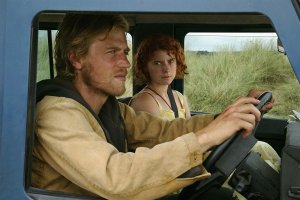 He’s Pascal Renouf (Johnny Flynn, hypnotic and terrifying with his vulnerable, fluid and mercurial demeanor). Pascal’s a local commoner rarely seen by the aristocrats who turn their noses up at his mangy appearance and his foul, working-man smell. His feral face is scarred, hands soiled, his peasant skin colored by days spent under the sun. Moll’s attracted to his otherness and his secrecy because she sees herself in his same likeness; they’re true outsiders through and through. Yet while the plot eventually somehow becomes too convoluted and too undefined in the final act (the criminal investigation concerning the murder of young local women needed more depth and the ending demands a sharper level of intent and nuance), Beast is still a film that flips this fairy tale genre on its head. The brevity challenges us to label Moll or Pascal as the murdering “beast” spilling blood in the small community, and while it’s fair to stay open-ended, a few more clues could have elevated this ambitious film into the realm of the polarizing social criticisms and the kind of sustainable ambiguous art produced by the legendary French filmmaker Leos Carax. Beast is breathtaking and bold and beautifully bleak, albeit a tad too safe as well.

Beast might look like a Jane Austen adaptation, but the film actually appeals to the duplicitous and seductive senses of Ingmar Bergman that’s been shot with the visual panache of David Lynch’s classically off-kilter color palette. So by structuring itself like one of Michael Haneke’s many polarizing glimpses into the estranged marriage between wealth and happiness/hysteria, Michael Pearce’s feature-length debut fearlessly – and perhaps recklessly – does more than the story really demands to be done. Having said that, Beast is a movie that’s been made with sincerity and vision, and if there’s ever been a reason to seek out a picture this small, it’s to be flustered by the mesmerizing work of the film’s lead Jessie Buckley, who delivers the kind of volcanic and dynamic performance that lives up to her own calm collection and seething bitterness. She deserves to be considered for Best Actress at the end of the year, as she defiantly declares that there’s a monster inside all of us; it’s just a matter of what it takes to come out of hibernation. After all, where there is darkness there is light. Beast flips the age-old adage on its head and proves the formula works both ways to vastly differing results.

“You’re wounded…I can fix that.”