In the effervescent and reflective Book Club, we get to watch four wise women reluctantly or openly allow themselves to live their lives with a bit of uncertainty. To break free from the monotony of routine, to add heat to the table blend seasoning on the kitchen table, and refuse to concede before ageist and unwanted discounts. It’s lovely and hilarious and heartening to see these older ladies meet the parking gate arm of life blocking them from progressing any further, only to successfully limbo beneath societal constructs and expectations with a limber soul and youthful mind. It’s easy to feel old if you allow yourself to indulge in such stiff sentiments. Book Club forces its characters to write another chapter, and I think it’ll inspire the same of its core audience. 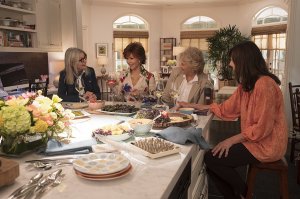 There’s something so open and warm about Book Club and its sage, tight-knit group of personalities. From the jump, this quartet have all forgotten how to sing their owns songs. Carol (Mary Steenburgen) can’t stimulate her newly retired husband Bruce (Craig T. Nelson). Sharon (Candice Bergen) serves as a federal judge and a divorcée who hasn’t been taken to bed in more than a decade. On the other hand, Vivian (Jane Fonda) is a booming business woman boasting sexuality but no sense of intimacy. The film is led by and introduced through the perspective of Diane (Diane Keaton), a recent widow whose daughters (Alicia Silverstone and Katie Aselton) try to wrap a Life Alert button around her aging neck. Her eventual romance with the pilot Mitchell (Andy Garcia) is such an adorable, delightful take on the salad days of a swell summer’s youth. Altogether though, the set up of Book Club is nothing very special – even a bit lackadaisical – and that the film becomes such an immediate joy is a testament to the staying star power of its leading ladies.

Quite possibly one of the dirtiest PG-13 movies I’ve seen in a very, very long time, Book Club does a great service to its cast by refusing to censor them. There’s no shortage of sexual metaphors and innuendo and shameless provocations. After all, the book club also functions as an opportunity to wind down with endless glasses of wine, releasing emotional guards and sharing transparent truths without reservation. It also shows how bad art can inspire just as easily as the greats, and the film uses the absurdity of E.L. James’ Fifty Shades of Grey trilogy to rekindle inner flames which have long been cold. The BDSM literature creates a forest fire within the circle, acting as an awakening of sorts for the sexuality they’ve all been conditioned to restrain and unlearn. Not only do they embrace the heat…they douse it with the fervid fuel of the book’s sequels. Book Club’s spunk and the spirited youthfulness pairs well with its prudence. 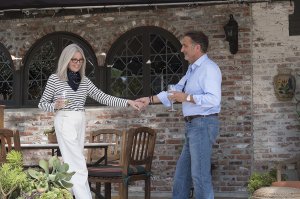 Where most comedies like Book Club fall apart is in the inevitable dramatic turn. Last year’s Girls Trip side-stepped this pitfall by carefully building up to the big fight with key little moments. Here though, Book Club allows its age to shine through, forcing its leads into a room and having a plain discussion. And guess what? No feelings are hurt, no hair is pulled, bullshit excuses are called out as such. It’s a lovely feminine touch, exuding the kind of grace and emotional strength lacking in most male driven films (if these were guys, there’d be a physical altercation and a slew of insults). By the end, you realize that Book Club makes two key accomplishments. First, it uses the specific framing of senior aged women to give those just like them in the crowd a face to finally identify with. Secondly, and in a much broader sense, the film welcomes us into a club where we’re meant to write our own words and finally decide to live the kind of story that we’d want to read. This one’s a page-turner.

“You are so much better at this than you think you are.”