“Just because you want it doesn’t mean it’s gonna happen.”

The Disaster Artist frustrated me, but not in the negative ways that you might expect. As a kinda-sorta autobiographical film recreating the so-called “best worst movie ever made,” this handsome piece of cinephile porn is about a confusing re-telling of a script that literally makes no sense, the combative bond between two outsiders fighting against all odds, and the embarrassment derived from the baggage that comes with the endless barrage of rejection and negativity that’s as long as a CVS receipt. It’s a convoluted Russian nesting doll that explodes at the calculated pace of a jack-in-the-box, and as a creative dreamer myself, it’s the kind of defective film I don’t think I’ll ever entirely forget. 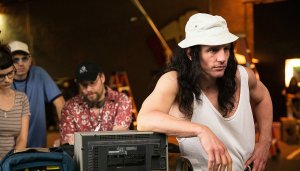 Two weeks prior to seeing The Disaster Artist, I blocked out an entire Friday night in order to watch 2003’s The Room. At barely over 90 minutes, the film took me 4+ hours to actually finish, pausing here and there to tourniquet the pain absorbed by my eyes, trying to contextualize what the hell I’d just seen. I now realize this was the wrong approach. The movie and all of its misery needs to be yanked like a loose tooth; get over the painful bit then revel in what’s left. For those of you who don’t know, The Room is a real movie, and it’s a terrible movie, and it’s also become a cult classic movie. The Disaster Artist is a recreation of this egocentric and plotless endeavor – deeply inspired by the descriptive and titular book written by Greg Sestero & coauthor Tom Bissell – and the film is as exasperating with its hubris as it is shockingly cognizant in its ability to showcase the comedy and drama of inexperience without ever separating one from the other. It’s a nimble movie that carefully expounds on the dark horse’s success, and more importantly, doesn’t exploit the desperate fool in the spotlight.

In the book, Tommy Wiseau’s physical description is less than flattering. He’s said to have a piratical presence and a Cro-Magnon profile, almost always in sunglasses, one belt around his waist and another below his butt to “make it look good.” James Franco stars as Tommy, and combined with the spot-on wardrobe work (including his ring of keys that outdoes a lifelong locksmith), Franco gives what has to be the performance of his career. It’s a studied and affectionate role. Greg Sestero (Dave Franco) meets Tommy in ’98 San Francisco, is intrigued by the untalented and unpredictable older guy’s ability to free himself from outside judgement, and their failed rat race though Hollywood becomes a light bulb moment: they’ll just make their own movie. Tommy writes, produces, directs, stars in, and finances the entire sinking ship. We can tell from the first day on set that things won’t go well. And yet we still watch. What’s so fascinating about The Room – and what James Franco (serving as both actor and director) captures so gracefully with The Disaster Artist – is that it challenges the definition of good and bad. How can The Room be the worst movie of all time when people return to it again and again?

The Room has no redeeming qualities outside of its own obliviousness and blind ambition, yet its worldwide notoriety suggests that might be enough. So, how do you describe a movie (The Disaster Artist) that’s inspired by a book (“The Disaster Artist”) that itself was a detailed account of another movie (The Room)? I’m not sure you can separate the three. However, when lumped together, they become the sum of their hodgepodge parts. The Room provides the context, the book adds the layers, and Franco’s film gives everything the heart that’s been missing. It’s evident that The Disaster Artist resonates with him on a spiritual level; here he works with/opposite his little Brother Dave, and some of his own peculiar endeavors have been viciously slaughtered by critics. Wiseau might not have the talent, but he matches Franco’s level of a persistence so dogged that you just submit to their authorship.

Franco’s made, in a way, a modern-day independent version of François Truffaut’s Day for Night through the lens of a Nike “Just Do It” campaign, and while the movie itself teeters into unnecessary clamor and bickering, at its center dwells the innovative and adaptive nature of the human spirit. Tommy Wiseau thought he made a great American drama, and after its reception, realized he unintentionally made a comedy that earns its laughs through a communal sense of failure and not a point-and-shoot gun firing rounds of Schadenfreude. Towards the end, Tommy believes himself to be the brunt of the joke. Greg pulls him aside and looks at the hysterical crowd. “They love it…how often do you think Hitchcock got a response like this?” Say what you will, but I’d bet my life that the answer was never. The Disaster Artist is the progeny of a great book and a captivatingly catastrophic movie, and it looks itself in the mirror with such confidence, acknowledging its sharp jaw line and splotchy complexion, that you’re simply overwhelmed by its confidence nearly every step of the way.

“You have to be the best you can be, and never give up.”