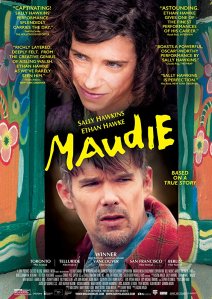 What makes Maudie special despite its frequent flaws has to be its willing attempt to paint its small pig pen of characters with such vibrancy, nuance, and intentional shades of unrest. Very little about the picture ever actually stands out from the crowded indie fare, and yet somehow the movie pulls off the oxymoronic nature of a story that is both big and intimate, like a postcard signed and delivered via an aerial advertising banner whipping behind a plane. As is, Maudie has all the substance of an old Chicken Soup for the Soul book, except it’s written with more disdain and more grace, and it’s elevated by two thespians near the top of their craft. The film is nowhere near as comprehensive as one would hope, but thankfully it’s not incomplete either. 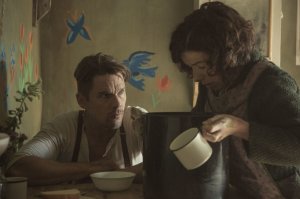 With the family home sold by her unloving and avaricious big brother Charles (Zachary Bennett), the arthritic and hobbled Maudie (Sally Hawkins) is under the supervision of Aunt Ida (Gabrielle Rose). Neither believe that Maudie can live and function on her own, casting her aside as a charity case who will sooner than later become an old unwed maid. This isn’t the life that Maudie wants, and to her credit, the woman fearlessly tries something new on for size. She’ll answer an advert by local fisherman Everett Lewis (Ethan Hawke) to become a housekeeper despite her inexperience, and she will, at long last, be the independent woman who those closest to her doubted she could ever possibly become. From there, she surpasses all expectations by becoming a painter known round the world. Small and patient steps turn in big, achievable dreams. 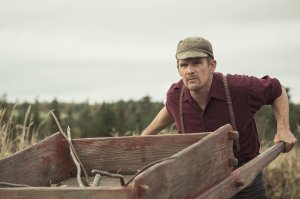 Everett’s a hard, demanding, calloused hide of a man. His rough around the edges personality tells us a few important things: 1.) his father had to have been even more abusive and 2.) his is a lonely life long in need of – literally and figuratively – a soft feminine touch. Seeing Maud knock at the door surprises him. But as she’s now the black sheep of the family and the only responder to Everett’s job posting, the two form a strangely hypnotic relationship. One that isn’t born from physical attraction or lust but from a desperation for any sort of companionship. I remember once being in a cellar speakeasy to end a long night of bar-hopping, seated with one friend and numerous new acquaintances, making the case that humans are capable of loving any other person so long as they’re desperate enough to feel the emotion. Maudie supports this boozy claim with a sobering depiction of human connectivity at its most elemental and basic. 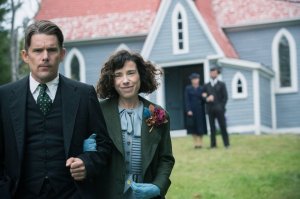 While resonant and incredibly touching on a personal level – Hawkins and Hawke are the two birds that make this movie fly – Maudie hardly paints its atmosphere with enough detail. It’s frustrating to watch a true story fail time and time again to establish and capitalize on the time and the place of the setting (I couldn’t confidently tell you either), and while director Aisling Walsh has made a film that’s practically unassuming to a fault, it still seems as though we’re barely scraping the surface of untapped potential. I can’t help but to compare her work to a minor Mike Leigh entry. Maudie is a showcase for two of our best living actors that takes to the canvas before adequately mixing up the paint at its disposal. Like the real life Maud’s artwork, this film is colorful and quirky and unrefined, all with a recognizable touch.