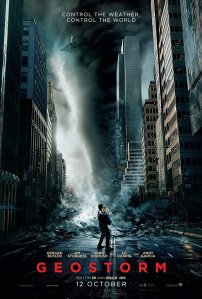 Believe it or not, Geostorm actually starts with a bit of promise. Its preaches to us through an Al Gore inspired An Inconvenient Truth voice over, declaring a war on climate change and the inarguable detriment it causes. From there, the film shifts its overt critique from the politics that interfere with the global common good to one that’s inherently American. Like our confused health care system, the people in this movie go to great innovative lengths to treat symptoms (here, it is worldwide weather disaster) instead of taking a deep look at the root cause of the decimating problem. It’s a shame that Geostorm offers up such timely commentary without a worthwhile narrative to hang its hat on. Relentlessly dumb action overtakes a mind worth listening to.

After experiencing cataclysmic event after event, world leaders band together to create “Dutch Boy,” a space station with a bounty of satellites designed to control the weather. Little pellet thingies (I honestly don’t know how else to describe them) deploy and stop tornadoes, tsunamis, arid heat. You name it, they can manage it. But since this is a great epic disaster film, something must go wrong. The first instance is when an Afghan village is found frozen over. Later, extreme heat excavates lava from the roads of Hong Kong. Jake Lawson (Gerard Butler), the creator of Dutch Boy, believes these are glitches. However, his brother Max (Jim Sturgess), a subordinate to the Secretary of State Leonard Dekkom (Ed Harris), uncovers that these errors were intentional. What worked so well in the film’s opening act turns into an all too obvious manhunt and a movie bound to a countdown clock. The mystery is not mysterious. The thrills are not thrilling. The laughs only work so that we don’t snicker at the drama. Geostorm is the film world’s version of the Space Shuttle Challenger explosion.

For what it’s worth, I think that I could have recommended this movie if it had let Mother Nature be the real antagonist, or more appropriately, the anti-hero. San Andreas took this approach, and while it’s a very mediocre film, the story still allowed for characters to do the right thing simply because it was the right thing to do. Geostorm tosses in a greedy, manipulative, conniving villain at the very last-minute, an individual so debased and impractical that he’s willing to unleash the forces of nature on humankind for political purposes. Yes, it’s meant to be a hyperbolic depiction of left and right-wing dynamics, but never is it given a soul worthy of hating or rooting against. What could have shown a light on humanity’s unwillingness to accept blame simply displaces the wrongdoing onto a faceless and forgettable antagonist. You can topple all the buildings in the world, but you need to make them feel like more than plain dominoes and to give weight to the wake of large-scale loss. Geostorm does neither.

I’ll say this about Geostorm; while not good in any respect, it’s not horrible either, and I think escapist audiences looking to zone out for two hours could do a whole lot worse. It’s better than the barbarically bad 10,000 B.C., about equal to Into the Storm, and is the runt of the litter descended from the long line of Armageddon and Deep Impact and 2012. The performances are belittled by spectacle, the spectacle undercut by visual effects, and the effects undone by poor CGI. Everything that could have been tolerable or even enjoyable is overpowered by something second-rate. What I don’t understand is the lack of concern for lives of those outside of white Americans, why it tries to be uplifting when it’s actually a gloomy prophecy, or why such a massive endeavor is led by an unbankable actor in Butler and a rookie director. Dean Devlin’s intentions are good, as is some of the script, but giving a new filmmaker and a longtime producer of movies of this magnitude like him is equivalent to watching a new weatherman go live on a nationwide news broadcast for the first time. It’s a painfully amateurish forecast.

“They didn’t know what extreme was.”