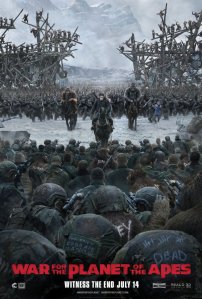 “I did not start this war.”

As overtly and obviously religious in tone as it is visually inspired by the Fall of the Roman Empire, War for the Planet of the Apes is the rare third act in a studio backed trilogy that culminates and perfects all of its previous efforts into an amazingly thoughtful, politically charged, and strikingly hyper-visualized fiction based on the faults of our past. There are touches of Moses’ prophetic leadership, Che Guevara’s environmentally influenced radicalism, as well as the sociological and political rebellion of Leon Trotsky. That such far-flung thinking is attempted is one thing; that the film covers every inch with such intimacy and realism is its own candle wish come true. War for the Planet of the Apes is a bona fide epic, an anthropological refresher in inter-special relationships, and a story about finding/redefining home.

There’s a brilliant, and however unintentional link between two different directors, found deep in the woods of all of these films. In Rupert Wyatt’s Rise, the bush is Caesar’s (Andy Serkis) cherished escape. From there on out it’s Matt Reeves’ show, and in Dawn the forest serves as a chilling respite and a hunkered down bunker of self-reflection. And in War, the trees become a camouflaged safe-space eventually pilfered by unwelcome soldiers and outsiders. Society has crumbled after the rapid spread of the Simian Flu and only those humans who are genetically immune still live on. Caesar’s only hope is for his fellow apes to live in peace, but after Koba’s (Toby Kebbell) vengeful actions in the previous film, we foresee Caesar’s dreams to be for naught. While being hunted by the military faction Alpha-Omega and its Colonel (Woody Harrelson), Caesar is faced with a fight or flight decision. With a story this ambitious, maybe he can attempt both.

Following personal tragedy at the hands of the Colonel, Caesar sends his colony to search for a new home while he sets off for revenge. It’s important to note that he’s joined by the orangutan Maurice (Karin Konoval), Rocket (Terry Notary) the chimp, and a gorilla named Luca (Michael Adamthwaite). In a move that should be a teaching point for the Homo sapiens sitting in their cozy seats with concession items in hand, the four different species of ape come together to support their greater collective purpose. If only we too realized that prosperity is such a simple joint endeavor. I think this is what fascinated me most about the picture. In almost all of its action, War for the Planet of the Apes combines guerrilla warfare and prison break sequences into an absolute adrenaline rush. But in the calm, in the moments where it’s irrefutably the most sophisticated silent film ever made, the story’s voice is even louder and more tacit.

To prove this point, the script has the foursome stumble upon Nova (Amiah Miller) shortly after the apes kill her father. She’s a mute who welcomes Maurice’s maternal warmth, attempting to and having trouble with establishing a shared dialogue. And so to start they speak with their eyes, their expressions, their body language. It’s a stunning display of stripped down understanding, as well as a monumental task for the performers and the animators. Reeves directs his human cast with an abundance of vulnerability. They’re tremulous, appropriately so given their face-to-face encounter with extinction. On the other hand, he seems to push his motion capture performers to exude enormous amounts of empathy in bodies packing blunt force strength. With neither side clearly in the correct or the wrong, nor the right or the left, War for the Planet of the Apes lies somewhere in a Libertarian middle ground of debate.

After some thought, I tend to believe that this is a film about the fine lines of communication. About how language has the ability to promote instant growth with those who share our tongue and also immediately stonewall those who speak differently. The apes embrace the mute girl, allow the talking and vagrant Bad Ape (a scene-stealing role for the American treasure Steve Zahn) to tag along, using words and ASL and symbolic gestures. In contrast, the humans tend to be condescending and authoritarian. Perhaps the Colonel is there to embody all of our worst tendencies. While he enslaves and throws these monkeys in a barrel, he acts on inconclusive evidence and fosters the growth of paranoid fake news. Colonel has his reasons and his methods to his madness – which we understand even if we don’t agree – and this is why the film is such a sharp double-edged sword poking our bellies, asking us if we’d like to partake in the “honor suicide” act of Seppuku. Do we root for the often cruel and irredeemable human beings we associate with? If not, do we promote our own extinction? Those are questions asked by both sides, and the film stays with you because it so openly tiptoes this discourse.

The performances astound, especially from Andy Serkis in the kind of 3 chapter character development that’ll deal him an honorary Oscar someday down the line. He’s revolutionized the format, cementing himself as the foreman of this particular new frontier in film making. You won’t find much better or thoroughly exhausting acting anywhere else this year. Cinematographer Michael Seresin captures some images worthy of being called timelessly lavish labors of love. Renowned composer Michael Giacchino does close to career best work, effortlessly blending styles between different compositions with a propeller effect throughout. Maybe Matt Reeves’ film is a little bit too long and too gloomy for its own good, so filled with snarls and anger, but that’s because this is a portrait of a shadowed and frustrated renaissance movement. Born from inequity, sculpted by jailers, treated as a pet. And then the picture and the entire series evolves into something different. A movie about mortality and legacy, about bloodlust and kindness, and about how the forces of nature hold a strong grip on the tides of all species. War for the Planet of the Apes is not without precisely measured joy or carefully manufactured aversion. It is, however, a film that distills our backwards thinking politics in an era pushing the boundaries of technology. Future filmmakers take note: this is how you utilize every penny of a big budget and make a thrilling, entertaining, and emotionally involving blockbuster. You couldn’t ask for a better finale to one of our decade’s best trilogies.