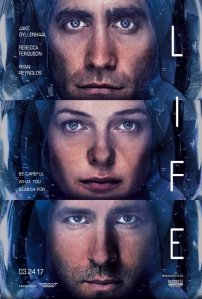 “We never trained for this.”

Much to the detriment of the story’s squandered B-movie material, Life takes itself far too seriously, and in direct contrast to that solemn approach, is oblivious of its own clear stupidity. As the ugly duckling offspring of the Alien franchise, this picture forgets the joyfulness that can come from a movie with technically sound and well-executed brainlessness. Nearly every line of dialogue and every flat character and every scene falls into a collective state of stupidity, but rather than embrace its low IQ and acknowledging that it won’t (and maybe can’t) achieve higher on the standardized test, Life just keeps on filling in the bubbles with a permanent marker instead of the required #2 pencil. Any past or present student knows that you usually don’t need to see the score to know that you failed. 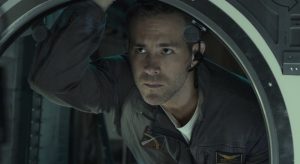 If this crew of characters were to take a Myers Briggs Test, I can imagine the results would come back as N/A. You won’t remember their names or understand their motives, but you will recall those faces on the poster. Rebecca Ferguson as the team leader. Ryan Reynolds as the wise-ass. Jake Gyllenhaal as an attentive guy or something else…who knows really. For how immensely talented those three are, it’s hard to watch their lackadaisical and often exaggerated performances and not think that Life was a flyover role to fill in the time between bigger/better projects. There’s fairly decent work from the likes of Ariyon Bakare, Hiroyuki Sanada and Olga Dihovichnaya as the background players, but their rather bland conventionality and their low place on the celebrity totem pole speaks to the broader symptomatic problem at this story’s core: we don’t care about the lives being lived in a movie titled LIFE. That’s an issue. 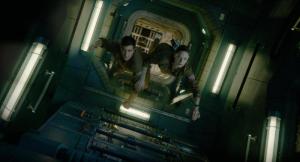 Life has little to no setup whatsoever before we encounter astronauts aboard the International Space Station as they secure a soil sample rocketing back from Mars. An organism is found in this haystack and it’s eventually named Calvin by an elementary school class (yes, that’s a serious plot point.) Still dormant, the microscopic Calvin is observed in a petri dish. Then it’s awoken under the right atmospheric adjustments, unleashes hell on the crew, and is a baseless and undefined non-entity. Even whilst typing this, I still feel silly expecting motive from an antagonist that is introduced at a cellular level. And yet this is where the film stabs itself in the back. Calvin might as well be a green ball of Flubber bouncing around and wrecking havoc in a family friendly comedy, and here we have a menace instead of a true villain; villains share humanity whereas a menace merely pesters. Rather than taking on its hyperactive and space set mold of 1958’s The Blob, Daniel Espinosa’s movie defies its own absent-minded likability with its self-serious drama. Had Life been the least bit funny or on the nose, It’d have resembled the classics of drive-in cinema instead of a modern-day VOD mistake. 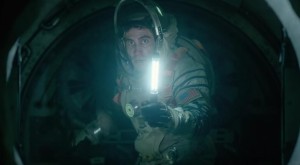 Life’s reckless and schoolyard attitude abides by no posted rules or regulations, showing a clear preference for convenience during hardship when a curious deference would have been much better suited to the film’s presumed thematic elements of moral responsibility and culpability. And so by the time that the spiritless cadaver called Life finally gets to its nihilistic ending – which is actually quite memorable and foreboding and squeamish in its cliffhanger execution – we’re left wondering what to care about, or if anything that already unfolded was worth caring for in the first place. My vote is an adamant Nay.

“Its curiosity outweighs its fear.”