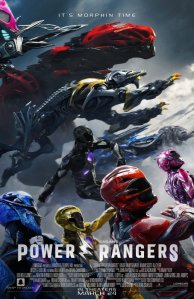 “You must become those warriors.”

I should begin by saying that this franchise was a formative piece of my youth. Fighting the backyard utility box with a wood pole. Jumping off the stairs and landing on a pile of pillows in a superhero pose. Torturing my parents with VHS tape marathons. For better and for worse, the series bled into my childhood. I’ve tried to write this review as objectively as possible – mostly because bumps and bruises aside, the movie ain’t all that bad – and I share that tie to my upbringing so readers know my subjective bias. However, with all that considered and hopefully cast aside, Power Rangers deserves to be critiqued on its own merits and its own faults. This is an middling movie that sags in the middle and never earns the emotions it earnestly wears like a spiteful tattoo sleeve, but it should be commended for at least bringing up such eclectic sentiments in the first place. It’s a better film than you’d expect.

Power Rangers begins with a drastically altered prologue compared to the TV series. Zordon (Bryan Cranston) buries the 5 Power Coins before a last-ditch effort to kill Rita Repulsa (an impressively devoted Elizabeth Banks). She’s a turncoat Ranger, killing her cohorts while wanting to attain the godly power from the planet’s guarded Zeo Crystal. Zordon sacrifices himself, Rita recedes to the ocean’s floor, and millions of years pass as android Alpha 5 (Bill Hader) waits to be unearthed at the modern-day seaside district of Angel Grove. It’s a strange approach; despite being rated PG-13, little kids will flock to this movie, and I truly hate when a picture uses subtitles for audience members who either can’t read at all or can’t read fast enough. That’s a bit alienating.

Maybe that’s because the film isn’t a bubble blowing bomb for children, nor is it fan-service to the series’ conventions. Power Rangers takes a decisively different fork in the road, and while the picture swerves in and out of the lane quite a bit, it’s never an outright affront. The second act is woefully overlong yet extremely important to the franchise’s future, especially if they expect to make a reported and ridiculous 5 more films from here. It essentially serves as the meet and greet chapter, with the protagonists’ destinies intertwined as they find their colorful golden coins in the local mine. What brings each person there is essential; we come to understand every hero because they all get so much back story, and it’s a weight worth dragging.

Jason (Dacre Montgomery) is the fallen football star whose school prank has shattered his knee and landed him in detention. There he sticks up for Billy (RJ Cyler), a brilliant mind living on the spectrum who lost his Dad and loves country music. Popular cheerleader Kimberly (Naomi Scott) is there too, serving hard after school time for her cyberbullying. Billy drags Jason to the mine. Jason stumbles upon Kimberly; she goes there to swim and clear her head. They run into the reckless Zack (Ludi Lin), a rebel with cause by way of his sick mother. Trini (Becky G.) treks the hills too. She feels invisible and shies away from communicating. Getting to know these characters takes too much time and jumbles the tone. Perhaps that’s why it works. Like a teenager, you can’t understand the thinking behind the actions, but empathize with the wrestling match of emotions in the respective rings.

In case you think the characters all sound familiar, it’s because you first met this exact same crew in The Breakfast Club. “A brain, a beauty, a jock, a rebel and a recluse.” Director Dean Israelite copies this formula and alchemizes it into a pre-teen film with a John Hughes heart shined with Michael Bay’s mechanical Transformers sheen. The picture features some outrageously blatant product placement, doesn’t have enough hand to hand combat, and devolves into heavy CGI catastrophe like nearly every other major tent pole film, and even then I felt connected to its spirit. Israelite honors the legacy by cranking out puns and angst and enough dutch angle shots to make you cock your head, all while directing a movie that’s completely comfortable with its own modernity and weirdness. The Power Rangers of 2017 aren’t necessarily better than all of the previous iterations, nor are they any worse. But it’s different, and it’s fun, and too few movies are able to tap into the unique playfulness and self-serious mindset of 90’s cinema while feeling as reanimated in the contemporary as this one somehow achieves.