“It fascinates me. I feel such great love for it.”

Martin Scorcese’s long-gestating latest is a film experience quite unlike any other I’ve ever had. It’s grueling, unshakably powerful and spiritually potent. Physically taxing on the mind and its 161 minute length testing the bladder. And unlike all of the paltry penances I’ve been given by priests over the course of my short lifetime – a Rosary here, ten Hail Mary’s there –  Silence does not conform to the lateral routine of standard devotions or memorized prayer. Here is a picture that defines the finest qualities of cinema: it requires deep interpretations, inspires outside research, and refuses to give us all of the answers in easily found places. This film stays with you like the contents of a suitcase belonging to a traveling nomad, so worldly and vacuum-sealed that I’m afraid it’s impossible to completely unpack and take inventory. And yet the luggage is carried with the utmost care, dignity, and unrepentant resolve. Silence speaks volumes not just on the fragility of mankind, but manages to elucidate the very foundation of what it means to believe.

Silence begins, as so many other early century religious tales do, in a state of savage persecution. Jesuit missionaries who traveled to Japan have been captured and forced to either apostatize their faith or endure torture. Most welcome death, slowly being bathed pour after pour by the water of hot springs. Father Ferreira (Liam Neeson), clothes tattered and his mind broken, bends on both knees. News of Ferreira’s surrender makes its way to Father Alessandro Valignano (Cirian Hinds) at St. Paul’s College of Macau. He informs Ferreira’s pupils of the news. Sebastião Rodrigues (Andrew Garfield) and Francisco Garupe (Adam Driver) outright refute the intel. To them it must be a lie, slander, and utter character assassination. This is the point where Silence makes its biggest mark, and where the complexity of its undefinable core comes into play. Two devout believers in Jesus risk their lives to travel along dangerous lands in order to prove that their mentor maintains his rigid faith. They see themselves as disciples and crusaders of Christ – which they are – although they could just as easily be deemed a doubting Thomas duo. Can they and can we ever believe without first seeing?

We have to ask what the motives of these European men are. Do they practice the acceptance that they preach or do they wish to forcefully plant their faith in a culture where it can never take root? The immeasurably engrossing nature of Silence dresses itself in these plain and often clandestine questions without ever compromising its bipartisan or culturally antithetical approach. And so we survey the pilgrimage of these duressed missionaries as they enter 17th century Japan. It’s an island nation under attack, casting all outside influences out to sea so as to secure their structure, identity, and as a means of resisting cultural appropriation. The two Jesuits are led by the outcast and traitorous drunkard Kichijiro (Yôsuke Kubozuka), a secretive believer whose seedy appearance and feeble morality could only be compared to that of Rashomon’s infamous Bandit and Woodcutter characters. Kichijiro pivots towards the film’s survival instincts whereas the missionaries counterbalance his weak-kneed posturing with men held in high esteem. They visit villages who practice in private and are aware that their very presence spells trouble for their seaside congregations. Should they capitulate and recant their vow to spread Jesus’ word in order to not endanger the denizens? That’s a difficult question of morality, and one that all but the most philosophical minds will be unable to answer.

The plight of the sinner and the ease with which they repeat their past sins is an integral piece of Silence. Samurai shoguns pillage the huts, prodding townspeople to step on a fumi-e, to publicly denounce Christ, or to spit on a crucifix. Some who refuse are tied to crosses, left to slowly drown from an encroaching high tide. Others endure Sumaki, rolled up in bamboo mats and then tossed overboard to sink below (side-note: your favorite high quality sushi rolls are prepared in this same tradition). These scenes are almost sickening to watch because of their cruelty, but like all acts of sacrifice, they inspire an even deeper conviction in the belief system of the martyrs. And still I found myself wondering, “How is this different from Jonestown?” I have no doubt that deeply religious folk will find that sentence to be deeply disturbing and consider it an agitprop, but there’s an undeniable comparability between the two. These 17th century believers are objectively similar to the people who drank punch in search of nirvana; one powerful scene shows newly baptized inhabitants expecting instant paradise. However, in this subjective subtext, the perpetuation of every religion’s universally central theme separates it from a cult’s mythical nature. There’s an unbridgeable gap between those who die for their faith and those who merely die in search of it. 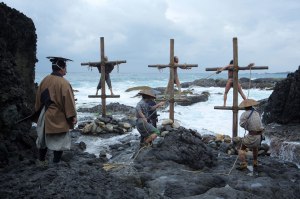 After more than 28 years, Martin Scorcese’s passion project finally came to fruition, and you know it’s a masterful movie when it can easily be considered one of the finest films to ever come from one of cinema’s Mt. Rushmore figureheads. We can feel his personal ties to the picture; it’s the story of outsiders on a dangerous pilgrimage, not unlike his own New York upbringing. As a priest devotes his life to the practice of faith, Scorcese has devoted his life’s ambition and purpose to telling stories. Silence isn’t a Catholic recruitment tool, nor is it a chiding voice towards atheism or agnosticism. But through his own vision, cinematographer Rodrigo Prieto’s ambivalent lens, and the best acting ensemble of 2016 (Andrew Garfield has never been better, and should have been nominated for this role), Scorcese encapsulates the most important elements of Shūsaku Endō’s source novel of the same name. Upon rereading it, I was especially taken by an exchange between Rodrigues and the Japanese. “According to our way of thinking, the truth is universal.” They laugh at the anathema statement and his futility, seemingly whispering Pliny the Elder’s famous quote, “In these matters the only certainty is that nothing is certain” in condescension. The arrogance and the ignorance of man run rampant in Silence.

While baptized and confirmed, I cannot lie and call myself a practicing Catholic. It has been almost 8 years since I regularly attended mass or prayed or aligned with a single system. It was a difficult decision to make. I remember sitting in my Aunt’s home, visiting for dinner after bypassing Easter mass, and my devout Grandmother refusing to hug me. She looked me in the eyes and said, “You’re not the same person.” Few words have ever hurt as much as those. I somehow managed to mutter, “I’m still me.” I was shunned, then embraced, and thankfully before her passing, able to communicate our differences in faith and the similarities in our beliefs and hope for something beyond ourselves. The translation and the interpretation of religious fervor differs between times periods and locations, and Silence’s meditative method goes beyond the religious rebuke or candor between my grandmother and myself. So how better to summarize this monument than to borrow the words from Mr. Scorcese’s own foreword in the novel itself. “Silence is the story of a man who learns – so painfully – that God’s love is more mysterious than he knows, that He leaves much more to the ways of men than we realize, and that he is always present…even in His silence.”

“Go on…pray. But pray with your eyes open.”