“Seeing you like this just breaks my damn heart.”

I remember the first time I was spanked as a child. My dad didn’t want to, and it definitely hurt, but afterwards he sat me on his lap and rocked me to sleep in the recliner. Logan copies this same type of paternal and fatherly formula, introducing us to intense pitches of violence while maintaining the capability of empathy. It unleashes anger but still knows when to withdraw its claws and extend a comforting hand, eventually building to a place that transcends the typical tropes of superhero storytelling or mythological mutant making. Ultimately, Logan is about the effects of psychological trauma and its expression through frantic rage that’s been bottled up and suppressed. It accomplishes all of this without swaying towards the conventional “end of the world” CGI spectacle or as a punchline driven comic book adaptation. As far as superhero fronted movies are concerned, Logan might be the genre’s best picture of this decade. 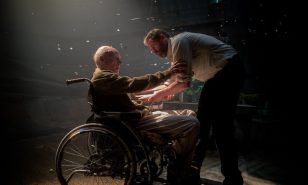 Asleep in the back of a leased stretch limousine, Logan (Hugh Jackman) is awoken by thugs trying to jack his ride. They picked the wrong luxury vehicle, not only waking up Logan, but also bringing Wolverine out of hibernation mode. Needless to say it doesn’t end well for them. The year is 2029 and our lead goes by his given name of James Howlett, driving around Texan clients at night while spending his days south of the border. There he’s holed up with fellow mutant Caliban (Stephen Merchant) and an ill Professor X (Patrick Stewart), whose disintegrating and powerful mind caused the deaths of countless pupils. He’s now prone to fits of seizures so powerful they suffocate those around him. Logan has a plan though. Save up money, buy a boat, hideaway out at sea (which pretty much excludes Caliban, a man suffering from photodermatitis and a previous turncoat who used his tracking ability to hunt down mutants). Logan sets itself up as a waiting game until a little girl sought out by bad men enters the foray.

The charismatic and conniving Donald Pierce (Boyd Hollbrook in pure villainy form), a security strategist leading a team of cyborgs for the corrupt company Transigen, asks Logan for info on little Laura (Dafne Keen). He refuses, yet the 11-year-old manages her way to Mexico, supposedly speaking telepathically with the Professor. An army of captors arrives, Logan tries to ditch the pre-teen, only to abruptly halt in his tracks as adamantium claws protrude from between her knuckles, beheading and dismembering the surrounding soldiers. Logan sees an absolute distraction; Professor X, ever the teacher, sees unharnessed rage expelled through unspeakable power. Not only does Logan turn into a chase film and a literal interpretation of The Mutiny on the Bounty in this second act, it also becomes an arid and wry picture somehow soaking wet with a silent but violent communicative narrative. What these characters do or don’t do, how they smile or grimace, says as much – if not more – than any dialogue could convey.

That’s a good thing, especially considering Laura spends the vast majority of the picture as a mute. I’m sure there will be countless thinkpieces all over the internet criticizing a voiceless young woman and her exploitation as a killing machine. These are arguments which make sense on the surface, but have no weight within this storyworld. This isn’t Eleven from Stranger Things or Hit-Girl from Kick-Ass. Shot with the burnt orange composition of a post-modern Western and plainly told through the relationship structure of 1953’s Shane (characters even watch crucial scenes, and the two become one in the final sequence), Logan mostly resembles 1994’s Léon: The Professional situated in a South Texas atmosphere. As such, Laura is a new and unwelcome branch flowering from Logan’s centuries long pursuit of numbness. In a series that’s so supportive of outcasts and others, Wolverine is the most compelling of the X-Men because he’s been unwillingly shepherded into the pen, a man whose humanity comes into conflict with his prescribed attributes. He’s never wanted them and is haunted by what he’s become. Conversely, geneticists and scientists mold Laura – a non mutant – to take on his likeness from his DNA. The further along Logan gets, the more it takes on the sacred passage from the most memorable scene of Shane. In an inferior film, this would come across as fan-service; in this case it’s packed with meaning and substance. 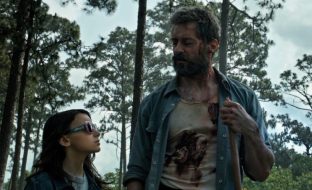 After almost two decades of refining and honing in on the heart and soul of this character, Hugh Jackman imbues this action figure persona with the dark sensitivity we’ve seen him deliver elsewhere. It’s a miraculous performance, and for whatever my word might be worth, is the most definitive of any leading man superhero role. He IS every iteration of this man, and if film were sport, the character would be retired immediately because it can’t be improved upon. That’s what makes the approach by Jackman and James Mangold (one of our country’s most overlooked filmmakers) so singular this time around. Laura doesn’t want to be X-23, just like Logan no longer wants to inhabit Wolverine. The title of this film reads like the world’s most plain business card for a reason. And while both occasionally succumb to rage – or even embrace it – they’re never entirely distanced from their violence. The bloodied blades pull back into their bodies, pulsing guilt through their veins. This movie is so painful and battered, so ultra-violent with rightful intent and a lasting sorrow. Logan, with an ichorous horizon for our anti-hero to ride off into, proves patience to be a virtue. The film drags us and its characters through gritted claws, a brush of briars, and a crown of thorns. Who could have guessed that a character still grappling with his past, castigating his present, and ferociously forsaking his future could be so overwhelmingly emotional and benevolent? And who knew a bloodied rose could be so beautiful?

“You should take a moment and feel it.”