“Black is in fashion.”

After a shower and a neck-nicking shave while Childish Gambino’s “Redbone” plays in the background, Chris (Daniel Kaluuya) welcomes his girlfriend Rose (Allison Williams) into his apartment. He’s clearly restless as he packs a duffel bag before a weekend meeting her parents. Rose kneels before her man wondering what’s wrong. So Chris asks his white debutante of a partner, “Do they know I’m black?” And this is the point where Get Out could be shown in any college film course, maybe even a class on sociology or behavioral therapy, and would necessitate a pressed pause. Why does Chris feel compelled to even pose the question? Why must Rose reassure him that her parents are progressive, intellectual, and proud supporters of Obama? It’s all about the process of a so-called proper presentation, specifically for a minority member by way of appropriation. We aren’t allowed to know Chris right off the bat, if only because we’re led to strictly and immediately identify him as a black male. Through these means, Get Out presents a petri dish of a worldview that appears polite while also perverse. Sick in the head but sterile in the soul. What makes the film so special is that it dares to crank the magnification up to the max; only then do we see the virus.

Above all else, Get Out seeks to illustrate the POC experience from an illuminating POV vantage point. Through Chris, the film rebukes false egalitarian beliefs and appropriately brands the idea that we live in a post-racial society as “fake news.” Within these concepts, Chris can constantly be found playing hide and seek with himself. He dips around questions as to how his traumatic past has shaped his present, homogenizing his entire being as one of many African-Americans instead of a 26-year-old man with a name and a unique individuality. Does he deserve to be with this beautiful seraph? Will her parents – well off white folks living the high life in a white-picket and fenced off pocket of suburbia – accept his visual and social contrast? Get Out allows a man of color to lead a film and to question his surroundings, all while imposing upon him the same questions minorities have to ask themselves every single day. “Do I belong?” And more importantly, “do I need to leave before shit goes down?” Those are the sort of tribunal call and answer questions addressed in this film, except they don’t respond as expected. This is a sharp, satirical, often stirring script that sets out to jolt you and receive a primal yet carefully developed reaction in return. 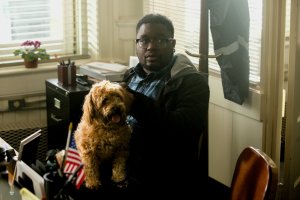 Things are clearly awry upon arriving at the Armitage estate. The groundskeeper and the maid, both black, seem cognitively unaware and strangely obedient. And when Rose first introduces Chris to her parents, writer/director Jordan Peele goes for a sublime shot. The camera is distant, the conversation faint. It’s not a cheery “welcome to our home!” sort of open armed embrace. Dean’s (Bradley Whitford) a neurosurgeon and a dad’s dad, or so thinks himself to be, taking Chris on a tour through the corridors, talking in speech patterns that mimic those of the stereotypical smooth black man. Missy (Catherine Keener) is a psychiatrist who’s developed a method of hypnosis. Both professions are important to the plot and to the development of the characters. And Chris has reason to feel uncomfortable. Even his friend Rod (Lil Rel Howery, a truly hilarious scene stealer), tells him something smells fishy. Ultimately, what elevates Get Out to instant cult classic status is that it’s a co-conspirator as a comedy of manners, but that it also builds promising pay-offs without anticipation, kind of like a surprising kiss at the end of an off-kilter night. You see it coming without the belief that it was ever going to happen. Then boom; you’re left dumbfounded, bewildered, smitten and gobsmacked. 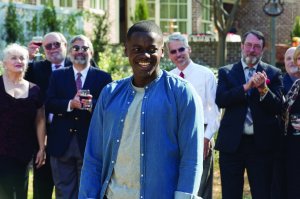 It’s been many years since I’ve seen a film so capable of thumping the funny bone and thwacking the kneecap all within the same story, and even more rarely, oftentimes within the same scene. Jordan Peele has pulled a rabbit out of a hat with this one, writing an intelligent, confrontational, and substantial screenplay while directing the movie with such sincerity. You can feel his inspiration in this memorable sketch and its carry over into his first feature film endeavor. With a pitch-perfect cast and his snide script, Peele comments on the constructed appeal and physicality of the black male. Dean’s dad raced against Jesse Owens. An older female party guest freely invites herself to feel Chris’ bicep. Another was a PGA golfer, and even knew Tiger. Peele said he was inspired by the robotics and pre-programmed acceptance speeches of the original Stepford Wives. As such, Get Out welcomes the clash between this disingenuous white culture with Chris’ unqualified, choking, heuristic and Shakespearean type of Othello self-diagnosis. 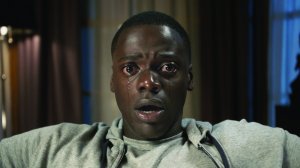 Get Out reduces the African-American male and the entire ethnicity to bodies through a slight gaze, abiding by culturally defined biological limits before springboarding into a new plane of existence and thinking and a powerful sense of intrinsically human differentiation. Peele implements shrieks, jumps, the expected door that shouldn’t be opened, and the sort of revelatory and all-knowing character in Rod that we haven’t seen since Jamie Kennedy’s turn in the original Scream. Rod knows the Renoir Rules of the Game, and taps into the minds of the audience members yelling “Dont go” and “You stupid” and “Turn around” to practically no avail. With Get Out, Jordan Peele straps us onto a pediatric table and digs into our inner psyche, our subdued racial ideologies, and our political tapestries with a reflex hammer. He taps the patella like a snare drum, ever so slightly and with increasing ferocity, and as we involuntarily kick back he somehow has the metronomic movie timing and the prowess to get the right response at all of the right moments. This is the first great film of 2017.