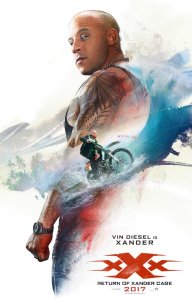 “The things I do for my country.”

Spy movies used to be rather sterile. Gunfire, conspiracies, mysteries to be solved. I’m mostly referring back to the older Bond films plus the likes of Three Days of the Condor, Patriot Games, Marathon Man. The genre had rules that were fairly set in stone. But it seems like ever since Brian De Palma’s 1996 feature Mission: Impossible took on the Tom Cruise brand of explosive set pieces, other energetic genres have started to leak into the typically psychological narratives. This is what xXx: Return of Xander Cage tries to specialize in, lacking an engaging story but containing a seriously entertaining mix of practical and computer generated stunts. There’s no air traffic control center to this film, and yet it somehow manages to get off the ground for a flight as long as the Wright Brothers’ first takeoff. 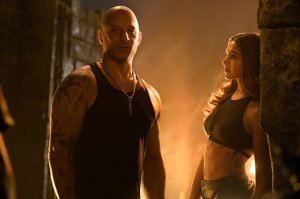 I’ve previously given films negative critiques for feeling totally “unnecessary.” In retrospect, that’s a terrible assessment because by comparison, what would make a picture actively needed? There’s no definitive answer to that question. Movies only exist to tell a story and to entertain and/or engage the viewer. In that regard then, the third film in this franchise only comes close to fulfilling the duties of your typical summer blockbuster entertainment package. Big thrills, big personalities, as empty-headed as Oz’s Scarecrow. But that’s sort of okay, entirely because the movie refines what it knows it’s good at and doesn’t waste a ton of time elsewhere. xXx 3 isn’t particularly great, even if parts are surprisingly well-conceived and executed.

Breaking down the script or searching for a theme is to render this film as futile. Nothing that happens really matters. None of these people exist in your head past the credits. The start and the end are mere bookends to nearly two hours spent on a laissez-faire playground. It is what it is. Xander Cage (Vin Diesel) returns to his call of duty after time off during the second installment, putting his talents towards serving the xXx special ops program. Some bad guys have a device bringing satellites crashing towards Earth, there’s a fight to stop them, things blow up. There’s no rhyme to this reason. And that’s what makes its middling success all the more magnetic.

“Do you want some of this?”