“Let them see what they’ve done.”

Pablo Larraín’s biopic Jackie is absolutely stunning on every level. It’s not a film you watch and ask questions requiring more historical context or data or details. In this story – a deft blend of a fable’s fatalism and the dreamy hopes of a fairy tale – what unfolds is absolute, clear, yet bears a shroud of nuance. You expect a film about Jackie Kennedy to cover certain topics: JFK’s assassination, LBJ being sworn in soon after, and a new brand of politics born into an era of American fear. Those are, shown with a cutting precision, the major events on a nationwide scale. Yet where the film truly excels is in its personal portrait of Jackie, painting her with brush strokes meant to give depth to her complicated visage. Jackie is an introspective and thoroughly engaging ghost story parable, starring a woman who must come to redefine her image, forever memorialized as a former First Lady and as a widow. It’s an utterly fascinating rumination on how loss and identity are shaped, and how in the public eye, can sometimes be unalterable. 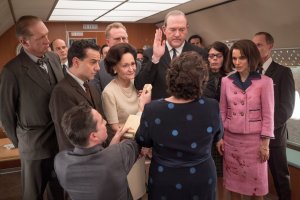 To outsiders, Jackie Kennedy (Natalie Portman) always gave off a sort of glowing exterior, always prim and proper and polished. Almost angelic in her disposition. So the film begins wisely, first introducing us to her life’s new chapter as a widow in mourning. Who is this woman? Why doesn’t she feel as warm as we’re accustomed to? We wonder as she wanders – visibly stricken by grief –  around the estate grounds in Hyannis Port, Massachusetts. It’s 1963, not long after John’s assassination on November 22nd of the same year. Jackie constructs this world for us with authenticity and a clouded sense of recollection, not definitively told yet still shown through utter conviction. I even received an email from my Great Uncle Bob proving this point, saying how he wasn’t personally involved in the past events but was nonetheless moved to tears by the film’s recreation of one of our country’s most painful memories. Jackie is not a movie about political agendas or parties; it’s about great loss, for the people in losing their leader, and for the wife of a murdered man. The feeling resonates.

Life magazine journalist Theodore H. White (Billy Crudup) comes knocking at the door. The set up is an interview, which screenwriter Noah Oppenheim uses as a catalyst to hone the film’s tone and the characterization of the iconic former First Lady. White asks, “So this will be your own version of what happened?” Jackie concisely replies with, “Exactly.” It’s impossible to not believe her with that much certainty; this is her story. And so we dive into their conversation, going back and forth, changing locations. She nods her head and drags a cigarette while delving into the time leading up to their shared now. Black and white footage rolls as she uncomfortably walks throughout the White House. John’s shot in Dallas. The funeral consumed by the masses. Jackie is the sort of rare film that shows events without ever making the film about them, but rather, how they affected the inner composition of Mrs. Kennedy.

When a performer takes on the task of playing a real person, the challenge comes in dissolving into the role. It’s even tougher when the individual was as widely covered by the media as Mrs. Kennedy; audiences are able to compare the performance to a previously seen and searchable reality on the internet. Magically, whether it be through thorough preparation or her remarkable skill set, Natalie Portman convincingly portrays Jackie with ease. She looks like the debutante, patterns her voice with that mixed up brogue, all while exuding grace, humility, and an innocence. Jackie says, “I never wanted fame. I just became a Kennedy,” and for the entire film we believe this statement. As the beautiful spouse of a President, Jackie’s seen as precious carry-on cargo to her man. Then he dies. However, instead of going round and round on the baggage claim conveyor belt, she picks herself up, not ditching the titles she married into, yet takes them in her own grip. I wouldn’t call Jackie a film about feminism, but it’s undeniably concerned with the female voice, its function within a patriarchy, and how a woman can be in both a flux state of servitude and strength all at once. 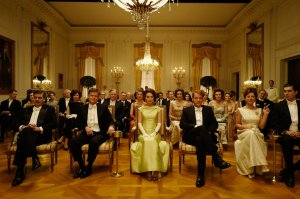 Jackie rightfully earned Oscar nominations for one of Portman’s career best performances, Mica Levi’s score reverberating the anguish of death, and Madeline Fontaine’s beautiful costume designs (which are absolutely crucial to finding Jackie Kennedy’s persona). Still, it deserved three more. First, Stéphane Fontaine – an artist at his craft – shot one of the year’s most ravishing pictures and should have been recognized in the cinematography field. Second, editor Sebastián Sepúlveda pieced together one hell of a challenging narrative, weaving the present and the not-so-distant past seamlessly. And lastly, the film’s sound mixing was the best I saw in a movie from last year. Technical components aside, what makes this such a heartfelt and heartbreaking experience is watching a woman so naturally composed and courteous have her world unravel at the distant hands of a hateful shooter. The bright red pastels tainted by the sepia of dried blood. She’s left to ponder, over and over, “Who am I?” The answer is and always has been – in the wake of tragedy and the rebirth of selfhood – simply and complexly Jackie.

“They wanted to share my grief, so I let them.”