Passengers might just be one of the most “woke” movies of 2016 (sorry if you aren’t a millennial and don’t get that slang reference for social awareness). Not because it’s all that great, and definitely not because it’s supposedly as awful as most critics will have you believe, but more so due to the challenging ethics at its epicenter. This is a morality play set in space, too romantic to be hard science fiction and too clumsily directed to be straight up drama. On the screen, Passengers is a middling movie. But on paper, it’s evocative, smart, and quite self-aware of the principles it presents. It might be pawned off to audiences as a manufactured product, yet deep down inside is a story focused on the causal relationships of choice and duality. I can only imagine what this film might have been had it not tried to be a blockbuster money machine.

Many people will go into Passengers expecting a fastball and be thrown a curve; Sony Entertainment has done this too often of late, their marketing department oblivious as to how they should advertise a film with a twist or challenge. Some trailers sold this as deep space exploration. Others billed it as a mawkish rom-com. However, beneath the two pretty faces and the shiny sets and the sultry atmosphere, Passengers asks its characters some of the hardest questions I’ve seen in a big-budget film this year. Think Interstellar’s life or death decisions of abandonment and isolation told in a world as unrefined as Overboard, with a dash and a splash of You’ve Got Mail level creepiness. The execution just doesn’t match the sophistication of the material.

Movie reviews are never supposed to be spoilers. Be that as it may, this is a picture that can’t be critiqued without divulging a secret or two. You’ve been warned. As you probably know from the endless TV spots, Jim Preston (Chris Pratt), one of 5,000 passengers aboard The Avalon and heading to Homestead II, wakes up 90  years too soon after a malfunction. He spends more than a year alone, drinking his life away while talking with a droid bartender (Michael Sheen), learning the ship and its mechanics, growing an unkempt beard and going pantless for a month because why the hell not. Jim’s ready to leap into space and die among the stars. And then he spots Aurora Lane (Jennifer Lawrence), still in hibernation, a blonde sleeping beauty. All of the passengers have information on themselves stored: interviews, personal writings, likes and dislikes. Jim fawns over this woman’s looks but falls in love with her intelligence and her personality, contemplating waking her up from her slumber. And yes, that concept seems ludicrous and obscene, but as a fictionalization of our future world, don’t these social media references make sense? Hell, forget You’ve Got Mail. Go all the way back to 1940’s The Shop Around the Corner. Falling in love with the idea of someone is an easy thing to do. Now imagine being on a journey through space where you know you’ll die before arriving at the destination. Sacrificing another’s life to save your own doesn’t seem as ridiculous, does it? If you still disagree, you’re not submitting yourself to the painstaking actions born from such unthinkable alienation. 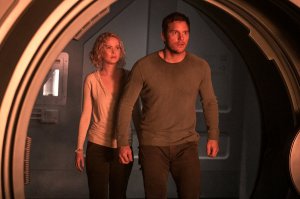 Passengers is basically a stripped down version of The Taming of the Shrew without any of the subplots or interruptions. We needed those diversions though, mostly because the film feels like a honeymoon destined to fail, showcasing how easily Lawrence’s rare combination of emotional/comedic talent completely overshadows Pratt’s inept attempt at drama. He should be a passenger in this film, not the leading man. Despite how awful its ending might be, this sci-fi Titanic decorates itself with some truly ornate and finely crafted futuristic designs. There was ample thought put into the scenery, and that mindfulness translates to the screen. From the brain of writer Jon Spaihts, Passengers is a passable film before leading up to the tumultuous, rushed, uninvolving third act. Unlike almost any big budget spectacle you’ll ever see, this movie only operates on all cylinders when its narrative is pedantic and forthright, exploring the id while ignoring the ego. That goes to show just how awful Morten Tyldum’s direction is. He can barely manage a scene, let alone prioritize a single tone. Tyldum’s movie could have been better as a soporific and hypnotic take on isolation, ramped up and addled by its effects on the psyche (like 2009’s Moon). Instead, with an uneven and horrendously scatterbrained score, poor editing, and the worst original song over the closing credits that I’ve heard in many years at the movies, Passengers merely lives within its title. This is a film you ride along with, only because it’s incapable of taking you anywhere new.

“You’re not where you want to be. You feel like you’d rather be somewhere else.”