A female driven chorus, so grandly operatic with the tone and the touch of a chamber choir, beacons us into the harbors of Manchester while the written credits live in the corners. Too many movies use the opening sequence as an opportunity for definitive landscape building; Manchester by the Sea, quite appropriately, uses these moments for depth. We see this place through cupped eyes, hear the waters rushing ashore, imagine cars running over the speed limit on the rolling roads of a distanced inland. And then we see Lee (Casey Affleck), an apartment complex super shoveling snow from a walkway. A hard film and a hard story follow this shot. Moving the icy mounds of white is not just a visual representation of the trials Lee will encounter, but also serve as a laboring penance for the mistakes of his past. Films of this sort are built on anticipation. Manchester by the Sea approaches drama so discreetly that you’ll miss it if you blink, sneeze, cough, or expect a gesundheit. Watch and listen carefully.

I understood Lee. Upon finishing college, my post-grad summer was spent living out a rent agreement in the town of Bloomington, IN. It’s a place that looks like it exists on the other side of The Lion, the Witch and the Wardrobe. The campus lively in the spring, the forest enchanting in the fall, the winter’s cold ushering in waves of wool jackets. But in the dog days of ’13, working 50+ hours a week and still partying like a student, I became an assistant custodian to a slew of public housing apartments. Painting cabinets, installing appliances, tearing apart rooms infested by bed bugs. It was a three-month long nightmare, and stands as the job I’ve learned the most from. To my employers, because I showed up on time, worked hard, and filled the job description, I was indespensable. The neighboring complex ran through four helpers during my stint. But to me, as a young man with an exit already marked on the calendar, I had nothing to lose. Lee doesn’t want to let go of this simple sense of independence. Neither did I. It’s surprisingly empowering. 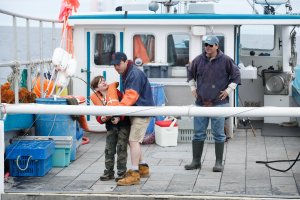 My custodial apprenticeship came as a means of passing the time; for Lee this is the future. Tightening bolts, changing bulbs, plunging toilets clogged with shit. I can attest that in a building block of strangers, you tend to see strange things. Then Lee gets a phone call, learns that his older brother Joe (Kyle Chandler) has passed from his progressive heart disease, and he must make the hour drive north to the titular small-town location in Massachusetts. Demons await him. Publicly showing emotion in the hospital is hard for Lee because he is so resistant and so unreceptive to sympathy. Lee’s a castaway who stows feelings deep within the soul, shielding his broken heart from all of the good and the bad of the outside world. Then we cut to a meeting with a lawyer. It was setup by Joe, hoping his brother would relocate and be the guardian of his son Patrick (Lucas Hedges). In Manchester by the Sea, being your brother’s keeper includes all of the big and little baggage that we leave behind for our loved ones to care for, to mend to, and ultimately to preserve. 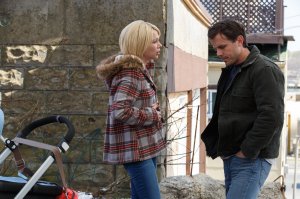 Lee feels displaced, out of touch, raw. The man can barely hold a 2-minute conversation, let alone consider uprooting his miserable life of beer and booze and bar fights to one planted in responsibility. Affleck plays the role beautifully, capable of showing restraint or going full throttle. It’s dynamite in that respect; either a plain looking log or an all out explosion. I won’t argue if he wins an Academy Award for this truly thespian role. We feel for him even though he doesn’t want us to. But I’m still not sure he even gives the best performance in the entire movie, a distinction I’d doll out to newcomer Lucas Hedges. With young actors, it’s very easy to gauge their sense of unease in front of the camera. Hedges understands this. Take one scene for example. The cemetery grounds are frozen and Joe must be kept in a freezer until a plot can be dug. Patrick hates this, and when he opens the kitchen ice box – brats and meat spilling out the door – he collapses. It’s a panic attack, and Hedges completely sacrifices himself to the moment. I know panic attacks are awful because I’ve had one. It rendered me to my knees, panting, blinded, borderline asthmatic. Imagine a hood over your head, ears ringing, your surroundings incomprehensible, all with a hand gripped so tightly around your neck that you could barely inhale. That’s the feeling. Hedges’ ability to be this broken and at other times so put together is astounding. He deserves Best Supporting Actor consideration. 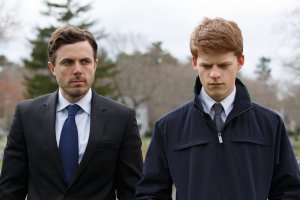 Manchester by the Sea, written and directed by Kenneth Lonergan, questions the roles of parents – blood related or surrogate – in the lives of their children. There’s always an impact. And while I wish it had been more different than his 2000 film You Can Count on Me, the director shows an uncanny ability to put real people on the screen no matter the level of false pretense. We believe Lee is irreparably damaged, in part because the story divulges his mistakes, also because Affleck is so candidly and emotionally unavailable, like a trumpet player subduing his performance with a mute. We see his ex-wife Randi (Michelle Williams, so affecting in such little time), reaching out for a man who stands inches in front of her face but exists a galaxy away. She’s the film’s maternal mast. And we see Patrick, practicing with his band, juggling girlfriends, being a boy not yet ready to be a man. At one point Lee tells Patrick, “I can’t beat it.” His opponent is sadness, and unlike more inferior filmmakers, Lonergan doesn’t try to overcome that which is already unbearable. This decision doesn’t make the picture’s pain any less felt, the love any less enduring, or the effect any less elegiac. If anything, it somehow supplants the fixed grief with an overriding sense of conditional, pragmatic, and honest hope. Manchester by the Sea is a powerful film that comes to us as quietly as it leaves. The hush is worthwhile.

“My heart was broken. And it’ll always be broken.”