“Change can only come from acceptance.”

Could a Purge actually ever happen? I’m highly doubtful, and at the same time, deeply disturbed I can’t answer the question with an absolute hell no. Maybe that’s why the seemingly prescient The Purge: Election Year feels so vital before the coming voting cycle. As an exploitation feature in a politically correct era of big-budget filmmaking, the movie has the stones to stand up and say, “that’s wrong, this is right,” voicing a strong and divisive opinion sure to ruffle the feathers of some and earn the applause of others. No rock goes unturned here, and the scary thing is, Election Year seems correct in every statement that it makes. 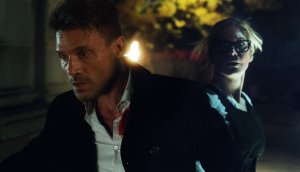 Frank Grillo returns as Leo Barnes, now chief of security for presidential hopeful Senator Charlie Roan (Elizabeth Mitchell). Barnes spared the life of his son’s killer in the previous film while Roan is the sole survivor of her family’s butchering years ago. They’re joined together by loss and their hope to disband the annual Purge altogether. Roan’s competition is the NFFA (New Founding Fathers of America), a group with an uncanny resemblance to the NRA hoping to have a member win the Presidency and continue on with the Purge. Due to recent changes in regulations, elected officials and the higher-ups in the country are no longer exempt from the night of debauchery, which is bad news for Roan, a Bat symbol for change with a target on her back looking to be taken out by a group of jokers.

A security breach sends Barnes and Roan out into the streets, entering an unwillingly complicit game of fight or die. They’re ambushed, helped by neighborhood deli owner Joe (Mykelti Williamson), his loyal friend Marcos (Joseph Julian Soria), and EMT Laney (Betty Gabriel). From there the objective is simple: survive the night. There are jump scares galore and masochistic slow-mo shots of revelry in the ruination, the plot feels forced towards the end, some of the performances greatly overplayed. But even then, Election Year delivers commentary on just about every hot button topic you could imagine, and most impressively, offers viable solutions. Despite being heavily left-wing, it’s hard to decry the positions it leans towards when the other side is so obviously in the wrong on the majority of the issues. The Purge trilogy might be obscene, yet it almost serves as modern interpretations of the three Humanist Manifestos.

One of the most primitive arguments you will hear about the film is that if all crime is legal, why are we only shown sadistic savagery? Imagine being wronged to the point of no return by a stranger, a friend, a relative. Then let that hate boil inside of you until the Purge – by then the kettle will be whistling – and the retribution would likely be more aggravated and spilling over. Time can manipulate and reinforce the best of ideals as easily as it does the worst of them. The Purge: Election Year steeps itself in hyperbole without losing focus on the countless controversies it sets out to debunk once and for all. Political oversight, greed, poverty, religion, racial divides. That’s just the tip of the iceberg. Writer/director James DeMonaco plunges straight ahead, not doing anything all that fancy, but makes sure to hit his target square away without entirely sacrificing his own artistic vision. His decrees are difficult to trump.

“Nothin’ will ever change.”