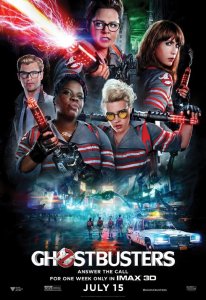 “It’s really easy to sit there and be a naysayer when you don’t actually do anything.”

Try to imagine a world without the 1984 film and I think this 2016 reboot would have fared much better. There’d have been less backlash, less snarky and sexist criticism, less unwarranted hate. People don’t like imitators. We can’t erase the past though, and the mantelpiece is already adorned with the revered original. So then, as a member of the audience, we have to wonder why a reboot should deserve to exist. I still don’t have a justifiable reason to that question because this film is so awful it doesn’t bother to suggest there’s even an answer. Four female leads is commendable, if not absolutely heroic in our continued overflow of male figureheads, but they mean nothing if the material is as ghastly as the ghouls they’re trying to chase. Ghostbusters is a horrendously tired excuse to press restart on a story that never should have been a franchise to begin with.

Dr. Erin Gilbert (Kristen Wiig) is up for tenure consideration following years of hard work, only to have her reputation tarnished when old friend Abby (Melissa McCarthy) decides to re-release their overlooked book covering ghosts back onto the internet. Their bond isn’t properly established until halfway in; a sign of poor screenwriting. From there the ghosts end up being real, they kiss and make up, then it’s time for team assembly. Erin and Abby are the paranormal scientists. Holtzmann (Kate McKinnon) is the brilliant gadget engineer. MTA employee Patty (Leslie Jones) joins as a metropolitan cartographer with an uncanny knowledge for geographic history. Ghostbusters feels like a film obsessed with protonblasting its own path, except that it decides to shoehorn itself inside the footprint of the original. What should have been at least mediocre becomes damn near monotonous.

Aside from the overrated Bridesmaids, I think Paul Feig is the most inefficient comedic director working today. His formula usually goes as follows. Two cameras, medium close-ups, too much improvisation granted to performers, all cut to a simple back and forth edit. More than any genre, comedy is dependent upon camera placement, blocking, and timely editing to ensure the jokes hit when they are supposed to actually hit. In that regard, Ghostbusters probably couldn’t do much worse. But I can see Feig’s potential as an actioneer, possibly even manning a horror film too. He’s able to make the film work when he briefly lets the camera move, yet the rest of the time we’re stuck looking at still images backed by either an emulative score or moments devoid of non-diegetic sound. Ghostbusters is not fun, or engaging, or empowering. This is a mere ephemeral step forwards in a feminist movement that I can only hope produces much better films in the long run.

Cameos from characters of old only interfere. The use of 3D comes straight out of the screen without first living inside the frame. The CGI ghosts don’t deliver scares but do conjure unsolicited laughs. Wiig and McCarthy aren’t playing characters so much as caricatures of themselves. McKinnon gives the worst performance I’ve seen this year, incompetent as an actress and unable to take a step back, always twitching and gawking to make her presence known in every foreground and background. The only watchable parts come from Jones in a really inhabited (albeit profiled) role and Chris Hemsworth once again showing comedic chops as the receptionist with brawn but little to no brain. Wash all of those issues down with a steaming hot glass of an all-time awful villain and you get a film that had serious potential but wrote itself under the table. An old friend once taught me the phrase, “almost only counts in hand grenades and horseshoes.” In that case, Feig’s film is nowhere close to the proximity of hitting the mark. I couldn’t watch it again without the power to press pause, fast forward, or mute. Halfway through 2016 and Ghostbusters is one of the year’s worst.

“Can you speak English?”