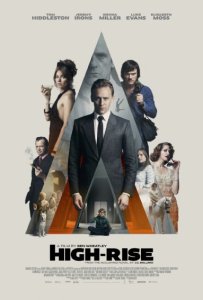 “I am the architect of my own accident.”

As a precursor to the following paragraphs, readers must know that I have yet to experience author J.G. Ballard’s 1975 novel High-Rise. Hopefully someday I will, and hopefully someday it will help shed light on this disastrous adaptation of his work. So let’s be clear; this is a film review in and of its own deranged, reckless self. Director Ben Wheatley’s take is well-acted, beautifully shot, wonderfully dressed. Its splendid and sexual superficiality begs to be undressed. That’s the problem too. Once at that stage, all hot and bothered and ready to release control over to primitive desires, you look up to find yourself facing an agamic anatomy. Nothing to be excited about, nothing too cheeky above or below the waist to raise eyebrows. High-Rise, as a movie, will leave those of sound mind in fits and only inspire critical praise from aspiring Rabelaisians. Neither outcome is favorable. 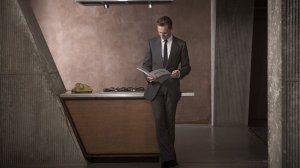 Despite the headliner names, the real star of this caste system take on a capitalistic nightmare is the in-development tower of Babel. Since the beginning of man, there has been fascination with upwardness. A closeness to divinity. A distancing from the hollows. In High-Rise, both strained dispositions intermingle while maintaining a strategic separation of the powerful versus the meek. They call it the high life for a reason. Associated with exclusivity over poverty/posterity, being on the top allows one to look down at what can literally be seen whilst envisioning what could possibly be above. Perhaps that is why the novel is so highly regarded. Because as a film, the dog-eat-dog practices of High-Rise alienate its viewers, telling an imaginative story tied down to concepts and not to connectivity. 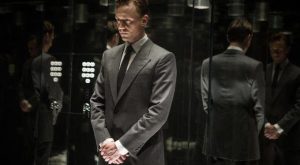 Dr. Laing (Tom Hiddelston) is the newest piece of inventory to the building’s block of conventional characters. Offbeat, overdressed, indulgent. Residing in the warfare residence’s middle ground, Laing is forced towards adjustment before becoming misanthropic. There’s exhibitionist behavior with Charlotte (Sienna Miller). A tryst with pregnant Helen (Elisabeth Moss). Games of squash with building architect Anthony Royal (Jeremy Irons). A friendly feud with failed lower-class documentarian Richard Wilder (Luke Evans). High-Rise really cares about its themes but never about the people it abuses to express them. Although the cityscaped Lord of the Flies background looks up to snuff, the story joists aren’t broad enough to bear the weight of so many conflicting statements. 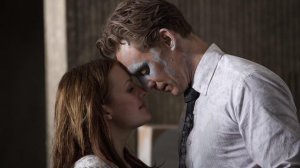 I watched High-Rise consecutively, searching for a sense of meaning that I somehow already knew I would’t find. Wheatley’s film – a lavish yet portentous look at the decay of humanity – defies understanding. Carelessly edited with shots distractedly misplaced. Proper misery in place of reverie. Driven by narration and indecipherable dialogue rather than established action. There’s a difference between telling a story and directing one. Wheatley seems to have done neither. The intrigue and sheen of High-Rise quickly rubs off to reveal a satire without structure; a mad-cap fever pitch of an attempt to dramatize unrest and visualize psychological imbalances.

“Prone to fits of mania, narcissism, and power failure.”