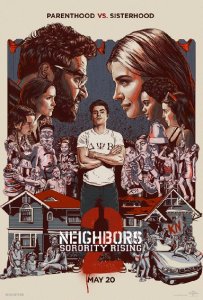 “I think a lot of this is going on in your head.”

Neighbors 2: Sorority Rising is a knockout film for all of the wrong reasons. It bullies its audience into any one of four corners, throwing punchline after punchline without the finesse or the style of a real boxer to be eloquent or more than adequate. Dodge, duck, dip, dive, and dodge. You’re still going to get pummeled by genuinely hilarious jokes delivered by some sort of immaculate conception. There’s no love behind the funny being born. Little concern for the craft of comedy. It’s a waving white flag calling for an abrupt end to sexism and ageism without knowing its own argument, left unprepared for anything that counters its stripping and stipulating point of view. This sequel, as ardent and enthusiastic as a college freshman, is just as naive in terms of real world realities.

The Radner family is back worse off than when we first met them in 2014. Mac (Seth Rogen) whimpers during sex and Kelly (Rose Byrne) is far along in her second pregnancy. They haven’t changed much. Jump forward months later, ready to move, their home in a 30 day escrow while the prospective buyers double-check the property for imperfections. Neighbors 2 implements a time-table story device put in place without a pin to be pulled. There are errant firecrackers, just no real explosions to marvel at or long to revisit. It’s all been done better before, usually by its own predecessor.

Next door, all that remains of the previously terrorizing wasteland fraternity Delta Psi are weight-bearing beams and a rickety zip-line until revolutionary and independent sorority Kappa Nu signs a lease. Abiding by the film’s agenda, the house for sisterhood becomes a biting critique on our culture, especially within the engendered, hyper-sexualized, overtly privileged brotherhood backdrop. A big middle finger to the accepted classlessness of frats and the demanded integrity of the young women. Neighbors 2 wants to wage a war of the sexes with too many parts that are too on the nose. Maybe it would have struck a chord had it used enough common sense to entrust one of its writing credits to a female instead of 5 white guys. These are jokes made by jokers, not necessarily by those in the know. 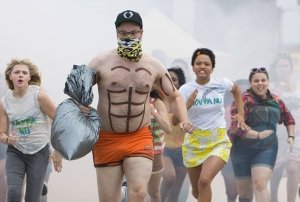 Predictably, there’s good physical comedy from Rogen and Zac Efron. Rose Byrne gets laughs while being way underutilized. However, the real stars are the head honchos of Kappa Nu. Led by the determined Shelby (Chloë Grace Moretz), the embracing Beth (Kiersey Clemons), the experimental Nora (Beanie Feldstein). Neighbors 2 is quite a funny, refreshing film when we’re with them. But then the audience gets suckered back into a laundry list of issues like bad parenting, bromance, self-worth. Too much of this occurred the first time around, making many of the story beats both expected and diminished in value. The biggest hindrance for the majority of mainstream comedies is an inflated length. Too long, too much ad-libbing, too much going on. Nicholas Stoller’s follow-up has great ideas, but with such a crowded cast, none of them really resonate. Neighbors 2 was either edited down to nothing or written without a single setup. Either way, this ain’t no uprising.

“They’re worse than the guys.”