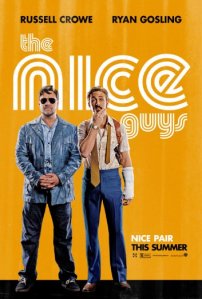 “Well, look who decided to show up to class.”

To understand all of the uniquely little things The Nice Guys does right means one must compare the work to its creator’s first cinematic foray. Serving as the up-and-coming bad boy screenwriter for 1987’s Lethal Weapon, Shane Black stamped his name on Hollywood with the kind of cocky sense of authority which is rarely matched by an exceptional level of talent. I mean, just take a minute to read the first two pages of that script; it’s an inspired work of genius. And by no mistake, Black – a masterful miner of truth confronted by happenstance humor – has parlayed his knack for writing into the director’s chair. He’s struck gold once more with The Nice Guys, patiently sifting through all of the muck and the mild to find the things that really strike a chord. 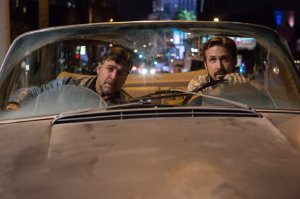 As always, Black’s cold open is irreverent and memorable, although here it’s certainly more immediately vague. Tucked away in the midnight hills of 1977 L.A., a young kid secretly looking at a full-spread cover of pornstar Misty Mountains has his attention shifted towards a car hurtling through the side of his home. Walks outside, sees that very same actress breathing her last breathes on his lawn, then covers up her breasts. It’s a shot similar to one we watch later on in the film; a brief connection from the first scene to the last, always a hallmark of thought-out screenwriting. In its briefest moments and longest winds, The Nice Guys reminds us that people who do bad things aren’t necessarily bad people. It’s a matter of subjective perspective, even if the point of view can in fact be objectively wrong from time to time. 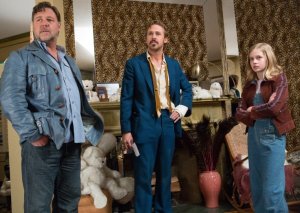 An amalgamation of L.A. Confidential, Dirty Harry, and Midnight Run, this is a movie with the essence of Mr. Black’s stories draped in the past of L.A. We see historical buildings and signs and names which all look familiar. Driving through the streets are Jackson Healy (Russell Crowe) and Holland March (Ryan Gosling). Healy’s a brass-knuckle wearing enforcer. March a combination of private investigator and the drunken Mr. Hulot. The two couldn’t be more different, only joining forces to solve the case of missing teen Amelia (Margaret Qualley). The Nice Guys’ plot is intricately mapped out, raising questions and delivering answers at all of the right moments. Despite the instant buddy cop chemistry between the subdued Crowe and the outlandish Gosling, the star turn comes from Angourie Rice as March’s daughter Holly. By making her the moral pulse and smartest character in the film – a Nancy Drew outwitting the seasoned Hardy Boys – Black is able to pit a hopeful optimism against a more realistic suspicion to see if change can occur. 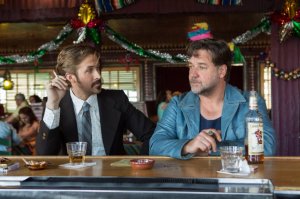 Although technically a murder mystery, The Nice Guys will go down as one of the year’s funniest films. Nary an opportunity for a good gag or a solid joke is missed, and Black directs the beats with pitch perfect timing, like a pianist maintaining a metronomic rhythm. The action pieces are all executed with precision, skillfully edited, delightfully full of Black’s wacky proclivities. Even though I didn’t find myself caring about the fact-checking of the case, or that the film runs a little long in spots, it’s impossible to not enjoy yourself with these characters. They’re detailed, original, absorbing, flawed people. The Nice Guys – a triumphant genre exploration – serves as further proof that not only does Shane Black make good films, but that he himself is good for cinema. It’s uncommon for most modern movies to be so intelligent, so hilarious, and so knowingly imperfect.

“People are stupid, but they’re not all stupid.”