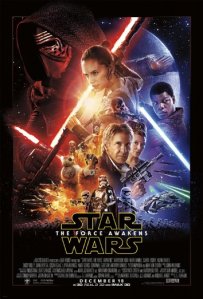 Is The Force Awakens good? Without a doubt. Is it great? Well, that’s not as easy to answer, and a different level of questioning altogether. The experience really depends on your past engagements with the franchise. If you’re deep in the fandom or a neophyte, aligned with the Force or the Dark Side. Those things directly influence the overall effect and feel of this film. As for me, I’m just a guy who’s game to see a good movie. One with no strings attached but still steered by the saga’s own dogged hope to find something that will make me throw the anchor down. Just because the film didn’t do that for me doesn’t mean it won’t be a revelation and a Godsend for others. The Star Wars occult is borderline religion. That’s something you must recognize. As such, maybe there were little nuances I missed. An occasional here and there callback that slipped past my Space Opera detector. All for the better too, I think, allowing the latest entry to feel refurbished rather than old plot points plucked out of time and placed in the new. Some spats soar, others blindly stumble, but overall The Force Awakens is just plain fun to watch.

Luke Skywalker (Mark Hamill) has gone missing, and apparently when that happens everything goes to hell. Kylo Ren (Adam Driver), strong with the force, leads the charge for The First Order to find the last Jedi hiding somewhere in the galaxy. On the flipside, The Resistance is captained by Leia (Carrie Fisher), now a General and no longer a Princess. They too are on a manhunt. Looking back on it a few short hours post screening, a lot of story in The Force Awakens strives for fulfillment and is left for naught. No characters have any motivation really. But Director J.J. Abrams has pulled a Lazarus phenomenon on the franchise, effectively bringing it back to life when the prequels all but ensured a doomed demise. The other gigantic galactic warfare series was his warm-up, and here he pulls out all of the stops, most likely because this juggernaut could afford to. His direction, save for a few key lightsaber battles where shots lose emphasis, is the best of his oeuvre. Luke and Leia are only sparsely used though, and Abrams wisely puts the dramatic focus on new characters. Suffice to say, they work.

The first of the fierce new duo is Rey (Daisy Ridley), a scavenger on Jakku, a desert planet where she was deserted by her family. She runs into BB-8, the new droid holding a piece of the coordinate puzzle to find Luke. Then they stumble upon Finn (John Boyega). The ex-Stormtrooper crash landed there with Resistance super pilot Poe Dameron (Oscar Isaac) after a daring escape. And then…they steal a beat-up Millenium Falcon, meet the legendary Han Solo (Harrison Ford) and his trusty Wookie Chewbacca, and off they all go at light speed ahead in the story. I know, that is a lot to absorb. It is when you watch the movie too. So many important character developments and plot points feel glossed over instead of being waxed with precision, almost out of earnest. We’re in the theater, some dressed up, others practically drooling. We’ll sit there all night if we have to. I wanted to tell the projectionist to pause the film. To let it breathe and remind itself that this is no sprint. The Force Awakens is a marathon and will be a record holder. Its sights are just too set on the finish line to let us fully appreciate each step preceding the last.

Much like Jurassic World this summer, Episode VII never shies away from the nostalgia. That didn’t work for the dino disaster pic, but Abrams takes a different route. It’s one thing to Xerox your predecessors. This integrates the forging into its own identity. So even though the wildly inventive first hour descends into routine later on, with events and foreshadowing and plagues we already know that we’re going to face, the film manages to retain the originality factor because the opening is so spectacularly strong and vocal. Some of that stems from Boyega, although as Finn he doesn’t get much to do outside of making wisecracks and heavily panting. The guy can act (watch Attack the Block asap), so here’s to hoping he gets a better character arc next time around. Ford seems alive as ever reprising Han, Driver plays Ren with just enough humanity and menace, and BB-8 could be from a classic silent film. There’s a clear winner here though, and that goes to Ridley. What a discovery she is. Ruthless, clever, blunt, confident. Eyes are the greatest gift a performer can utilize, and hers are pure magic. We care about Rey. We understand her determination, her strength, her emotion. Ridley, no doubt the film’s lead, gives one of the best female performances I have seen this year, injecting new life into the story and her character when both continually want to dwell in convenience and ease. This should be her catapult to stardom.

And did I mention how funny it is? Physical comedy and zinging one-liners help lighten the mood in the face of total destruction. That’s part of the appeal of Star Wars; the gravity lies there in the situations and the characters often choose to ignore it. However, that detracts from the dramatic effect of the film, and while it is theme park fun, I felt detached and uninvested. Decisions are made on the run without foresight or acknowledgment. The tagline could have been, “I’ll take your word for it.” Because the narrative stays so highstrung, there is no line of questioning. We have to accept what these people accept and get on with it. There’s no challenge to that process, and as a film so obviously inspired by common biblical denominators, it asks the audience to blindly believe in all of the unseen. I’m no doubting Thomas, but still give me evidence, not smoke and mirrors and nostalgia fueled merchandising. Don’t get me wrong either. The Force Awakens is very, very good. Greatness exceeds its grasp and should exceed our expectations. I just wished it had cut off the thrusters and remembered it was passing a cross-country torch and not a 400M baton. Abrams and his outstanding cast have the legs to carry us there. Maybe next time they’ll be allowed to exhale.